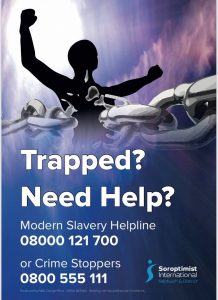 Nantwich Soroptimists have been applauded for their anti slavery initiative: a report by Helen Piddock – Jones

In mid November  2018 three members of SI Nantwich (Anne Thompson, Anne Barnard and Helen Piddock-Jones) attended a Modern Slavery Awareness event held at the Civic Hall in Nantwich. It was an excellent event, sponsored by the South Cheshire Chamber of Commerce and the Mayor of Nantwich, among others.

The Speakers included the Gangmasters and Labour Abuse Authority, the UK border force, the police and some big businesses who had discovered numerous slaves within their own workforce. In every town in the UK slaves are hidden in plain sight. They do their job but nobody knows where they live and their pay goes into somebody else’s pocket.  The Police and other authorities are now all set up and ready to act and move in, but they can only be effective if they are given information by ordinary people.

In SI Nantwich we have been working very hard to raise modern slavery awareness, but admittedly from quite a small local community level, whereas in fact it is now very big business. Worldwide there are 40 million victims. We usually think of the women slaves, but in fact 70% of modern slaves are men, and it’s rife in the construction industry, fishing, agriculture, large packaging firms, all areas where there are low skill jobs, as well as the car washes and nail bars and brothels. Two areas that are totally new to our experience;

Also, sham marriages where women are brought over here specifically to marry a stranger who can then live and work here, but she gets sent back.

There were 2 main messages.

All businesses should closely examine their work force and make sure they have proper addresses and the money goes to them and they are willing workers. But the authorities have discovered that some people they have tried to rescue, although slaves, say they are better off here than they were back home.

Second thing; everyone has the individual responsibility to play their part in looking for and then helping these victims. At the meeting we were such a varied group of people from all walks of life, but the speakers said that this was perfect because our different perspectives was our strength.

In the open session Helen stood up and displayed the Anti Slavery posters which SI Nantwich are asking local businesses (particularly fast food outlets and small corner shops) to display in their windows. We were thanked for our endeavours and the main speaker said that that was exactly what was needed. Local communities should be getting out there and doing initiatives like ours. Afterwards five separate people came over and asked if they could put up one of our posters.

Members of the club are now newly inspired to get out there are ask local business for their support in displaying the posters which are aimed specifically at helping the victims of modern day slavery.

Nantwich and District Soroptimists in Action in October 2018

Local soroptimists have supported an anti-slavery campaign for some years, linked to the national Purple Tear Drop Campaign. To mark anti-slavery day on 18th October this year we organised an awareness raising campaign in both towns. We did all of the things listed above, which have been widely reported, and the campaign continues, but what goes into making it all happen? Leadership is a key ingredient, and whilst there was a whole team involved, Marian Wade is a real champion for the campaign. This blog tells a bit more about her and what went on to support the campaign. 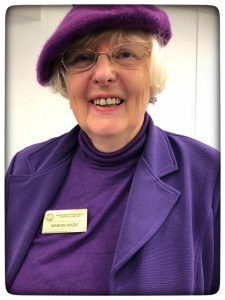 Having decided on the theme, which was to promote the helplines to local people and victims, plans were made and brought to our monthly business meetings. Marian is keen that everyone had a chance to be involved, and there were many activities for us to sign up to. One of these was the craftivism evenings we held, making a banner with labels on with the help line number on – lots of sewing, plaiting and chatting – these were creative and fun! Marian also ran a competition to generate ideas for the leaflet. Other people made purple (yes, they really were purple) biscuits for sale at the coffee morning and helped out on the day. A lot of liaison went on with the council, which is also very supportive of the campaign and running complementary events and coverage, as well as the police and The Salvation Army, which provides support to victims.

Marian played a key part in the promotion of the issues. She did an interview with Signal Radio as well as Red Shift Radio, as well as drafting copy for local papers and newsletters.

On the day of the coffee morning, the theme was purple – you may be able to tell by the photo of Marian above! The aim was to raise awareness of visitors, rather than raise money, and there were info boards and leaflets. Members of the club chatted with people who joined us for a drink and cake to make them aware of the issues and inspire them to take action. The Mayor of Nantwich Town Council as well as the Mayor of Cheshire East also joined us in support.

Marian was pleased with how the campaign had gone, and the response of local people and organisations. It is an issue she cares passionately about, and she is never afraid to speak up for what she believes in. She says

“The sergeant in charge of the anti-slavery team in Cheshire is saying their cases have escalated enormously since they were formed.

“We have spent years now raising awareness locally that there is such a thing as modern slavery in south Cheshire, and that took some time.

“This year we decided what we wanted to do was to get to the people who are trapped themselves and give them an escape route.”

As a long standing member of the Nantwich & District Soroptimists,  Marian she says that she was inspired by her grandmother who was a member of the Fawcett Society and although many of her contemporaries joined other organisations she felt a connection with an organisation that is about empowering women. She is one of the amazing women who are making a difference in their community by taking direct action in her everyday life, working with other women, showing leadership where it makes a difference. As a new member of Nantwich and District Soroptimists, I have found this a very energising campaign, inclusive and interesting, thanks to Marian and all the other women who have made this successful – it certainly won’t be my last campaign!

An Awareness Raising Event was held in Nantwich for Modern Day Anti-Slavery on Saturday 13th October by Nantwich & District Soroptimists. This is the 6th year the group has been holding an event. We were support by our Mayor David Marren. Paul Miller from Libre Solutions also attended. After talking with our President Mrs Nancy Lowe, they thanked us for our work. We held a coffee morning and had a tombola where all the prizes were wrapped in tissue paper so the prize was hidden, as Modern Slavery is a hidden problem.

The event took place as part of the wider Purple Teardrop Campaign aimed at raising awareness of Modern Day Slavery. The Purple Teardrop Campaign is a Soroptimist International initiative: please see http://www.purpleteardrop.org.uk for further information. The local campaign is supported by lawyers Hall Smith Whittingham who can help victims of modern slavery and human trafficking make claims for compensation. Legal aid is available for anyone on certain benefits or a low income. Phone 01270610300 or email eappleyard@hswsolicitors.co.uk for further information.
The poster below is now being widely distributed throughout Crewe and Nantwich to raise awareness of Modern Slavery and publicise the help line numbers.
Paul Miller said, “Crewe is a hot bed for modern Slavery Abuse”. 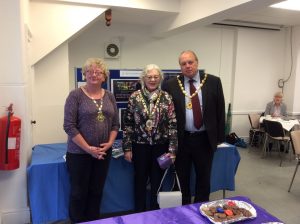 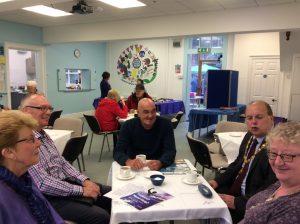 Please feel free to take a copy of this poster and display in your place of work, club or send to friends

Is there Modern Slavery in Cheshire? 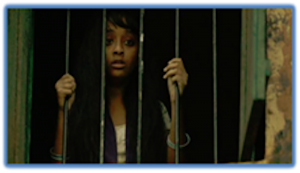 On Monday 25th September in Nantwich Civic Hall, #Soroptimists Nantwich held a Modern Slavery Event with a FREE showing of the film “SOLD” 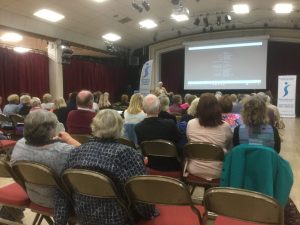 The film told the life story of a girl from Nepal who is sold into the sex trade.

Following the film there were excellent presentations and open discussions with the “Slavery in Cheshire Panel” including:

Thank you to all who came 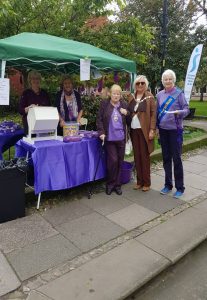