Who are some of the amazing women in the law? What can we learn from them? Well, nowadays there is a reasonable gender balance amongst judges, with over half of judges under 40 being women, but just over 100 years ago it was a different story…

In 1904, Emmeline Pankhurst’s daughter Christabel was refused admission to the bar because of her gender. Much fun was had at the prospect of women barristers, with an image of a woman in crinolines, muffs and wigs sub-titled “probably the next absurdity” in Punch magazine from 1910 – some 12 years before the first generation of women was called to the Bar.

Carrie Morrison, Mary Pickup, Mary Sykes and Maud Crofts were the first women to pass the Law Society’s examinations to qualify as solicitors in 1922. Like many other early women solicitors, all except Maud Crofts were Soroptimists. Read more about them here: https://first100years.org.uk/news/3224/

2019 is the centenary of the Sex Disqualification (Removal) Act 1919 paving the way for these women and those who followed them to become lawyers– what progress has been made?

It seems that more women are going into and succeeding in becoming lawyers. 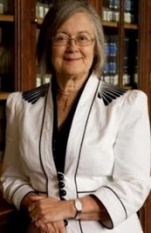 This photo by unknown author is licensed under CCBY-SA

Some of these lawyers have become very senior – the President of the Supreme Court is now a woman; Baroness Hale. She says, “In my view, diverse courts are better courts.” In a Guardian article on 1 January 2019 she expands on this and says “There are several reasons for desiring a more diverse judiciary in terms of gender balance, ethnicity and social background, Hale said. The most important of these is so the public can “look at the judges and say, ‘They are our judges’,” rather than seeing them as “beings from another planet”. There are currently three female justices on the UK’s 12-seat supreme court.

So how far have we come?

As Helen Pankhurst points out in her book, Deeds not Words, our work is not yet done to achieve equality. “Careers advice perpetuates gender stereotyping. Baroness Scotland QC (and former Attorney General) remembers being told she should aim to become a supervisor in Sainsburys”.  Women who want to succeed in senior position in the law need to be determined and resilient to defy such advice. Take the story of Grace Ononiwu, appointed in summer 2014 as Chief Crown Prosecutor for West Midlands Crown Prosecution Service. She recalls, “When I was about 14 or 15 years old, I went to a careers fair and was asked what job I wanted. I said a lawyer. The teacher said ‘No, you can’t do that. Have you considered being a legal secretary?’ See more about her here

And here is another story about Amanda Adeola showing initiative to follow her dream, as she went from observing lawyers at work in her local court to gaining a paralegal position, followed by the all-important training contract #WomenInLaw

You can find more about women in the law through #womeninlaw

What these women seem to have in common is real determination to pursue their ambition, resilience to setbacks and self-belief that they can achieve something.

We are looking forward to hearing Glynis tell her own story about becoming a lawyer, and then a District Judge, and her take on this theme of amazing women.

Soroptimists have a vision that women and girls will achieve their individual and collective potential, realise aspirations and have an equal voice in creating strong, peaceful communities worldwide. Our club in Nantwich and District is celebrating amazing women who help transform women’s lives at our 70th Anniversary Conference on 1st June, and we really hope you can join us there. You can register here.

In the meantime tell us what you think about what makes women amazing, and whether you think progress is being made to achieve our vision.