A group of us went with some friends from Motherwell Women’s Charity to visit the Pankhurst Museum and hear from Manchester Women’s Aid which is also based there. Beforehand we had a lovely lunch at The Whitworth Art Gallery. The museum itself stands incongruously as a victorian house in the middle of the modern buildings of Central Manchester Hospital, and was where Emmeline Pankhurst lived and started the suffragette movement from her parlour there. We learned a lot about the birth of the suffragette movement and Emmeline’s role in this, which was very interesting. It was also very useful to hear about Manchester Women’s Aid, supporting 5 refuges and a range of outreach services for women subject to domestic abuse. we were pleased to hear that they are in contact with, and learning from our local service Cheshire Without Abuse, which is considered a model of good practice. At the end we walked round the lovely suffragette garden, planted past year for  the centenary of some women getting the vote in beautiful suffragette colours of purple white and green. It was a great visit, and we will definitely return! Here are some pics of our visit: 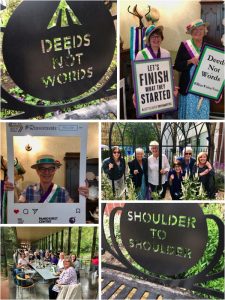 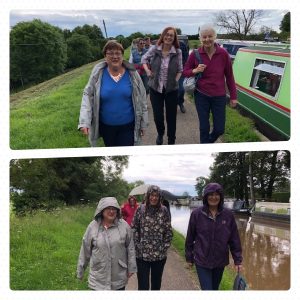 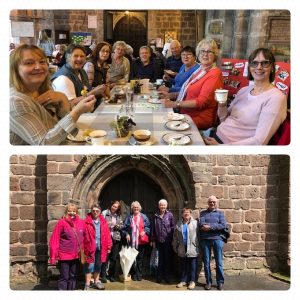 A nice cuppa at Acton Church

After a very busy day at our Conference (Nantwich and District Soroptimists’ 70th Anniversary Conference: 1 June 2019. ) members and guests gathered for a celebratory dinner at the Hunters Lodge Hotel. 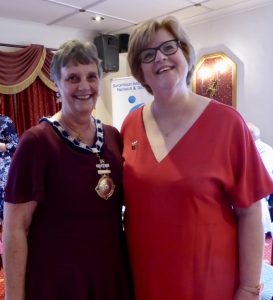 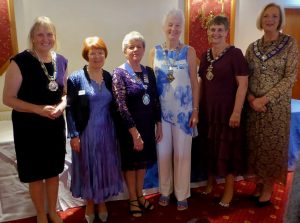 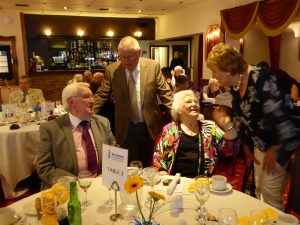 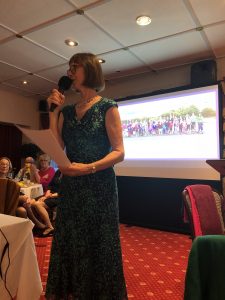 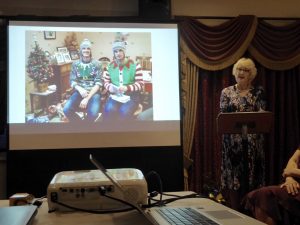 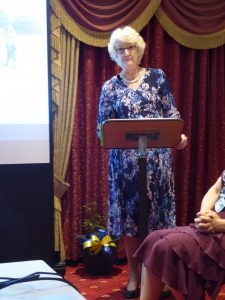 After a lovely dinner we were entertained by Cathie Sabine, former President of the Lawn Tennis Association.

Carole hosted a fish and chip supper for our visitors! 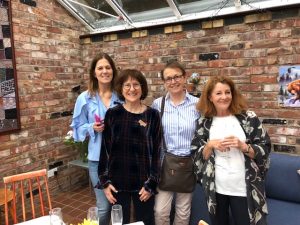 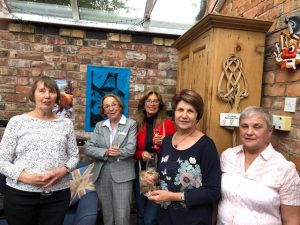 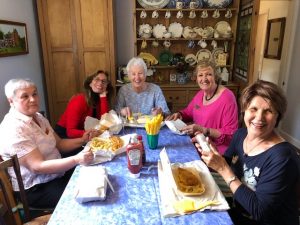 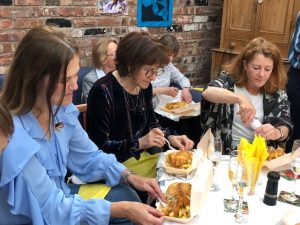 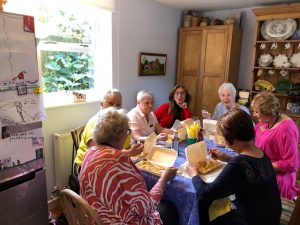 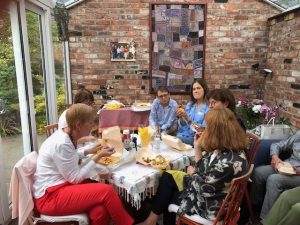 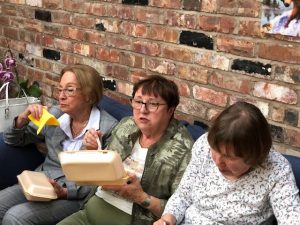 On the morning after the dinner…

members entertained our visitors at the Nantwich Bookshop before they left for home. 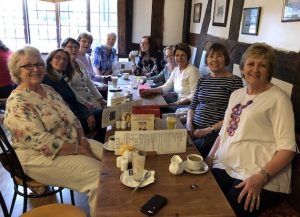 On Sunday May 5th members of SI Nantwich & District spent a very enjoyable afternoon walking along a stretch of the Shropshire Union Canal. Although it was a bit blustery and cool there was bright sunshine for their walk. They passed the marina and all its moored boats before leaving the canal at bridge number 93 to make their way to Acton’s St Mary’s Church. Every Sunday between 2 and 4pm church members provide tea and wonderful home made cakes to any lucky visitor. Most of the Soroptimists went back for a second piece of cake before climbing up to the bell tower to hear all about the bells. 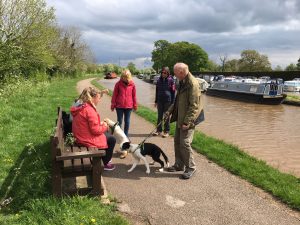 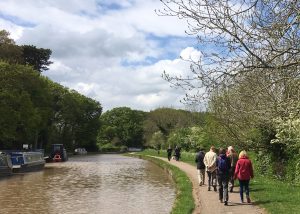 This walk is going to take place at least three more time this year and all members and their families – and dogs – are welcome to come along.

A group of Soroptimists and friends had Sunday lunch at The Clink.  The food was delicious and all prepared from scratch.  The service also was excellent.  We had the concept of The Clink Restaurant explained to us and told of its success in helping to reduce reoffending.
It is certainly an outing to be repeated!

Approximately 25 members and their friends gathered on Friday 15th February for a coffee morning to raise money for Target Ovarian Cancer. We enjoyed good company, delicious cake, beautiful sunshine and a super raffle. 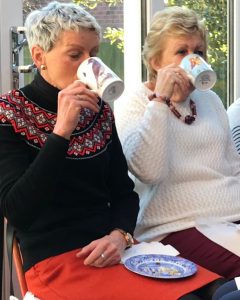 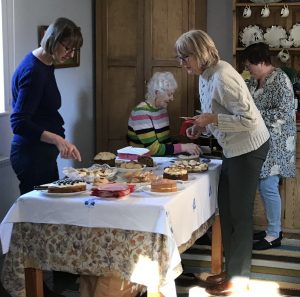 Thanks to all who came to support this very worthy cause. Thanks to everyone who helped, with the biggest thank you to Carole for hosting the event.

A cold and frosty Saturday morning in February saw a party of 10 members heading to London for the weekend organised by Gill- Cheers Gill!

We stayed at 63 (the Soroptimist hotel.) On Saturday we went to see the Book of Mormon which was very irreverent and rather rude but hilarious. 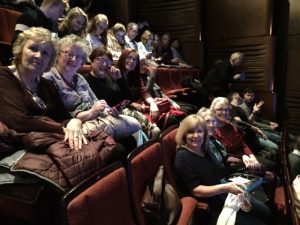 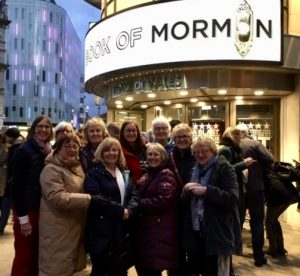 Later we went for a meal at an Italian restaurant near the hotel. On Sunday we walked through Kensington gardens (opposite the hotel) to Kensington palace to see the exhibition of Princess Diana’s dresses. Anne and Jean attempted to look suitably regal in a Queen Anne number! 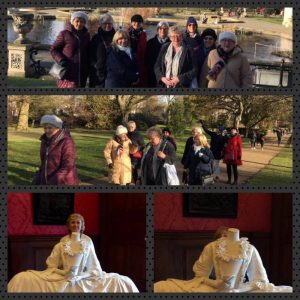 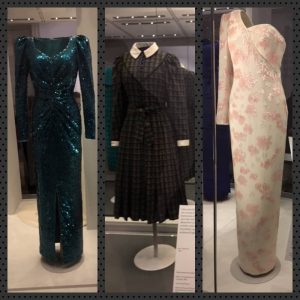 Then on to Kensington High Street for some retail therapy. We said goodbye to three of our number and the rest of us went for an Indian meal. On Monday – the Science museum before heading back home.  Great weekend full of fun and laughter.

The verdict on the show?

It was brilliant. Funniest show many of us have ever seen. So much so that when it goes on tour in a few months time we would like to go and see it again and invite all our other friends.

January 2019 saw a very successful Bridge Drive held in aid of President Nancy’s 2 charities: Water Aid and the Food Bank (Trussell Trust). Held at Crewe Alex’s hospitality suite, the competitors enjoyed an afternoon of Bridge and a tea, served by members of the Club. Over £800 was raised for the Charities from entry fees and a raffle. 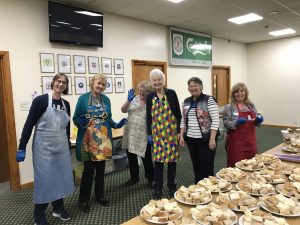 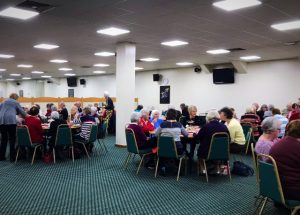 President Nancy was guest at the opening of the Nantwich Museum’s new Exhibition celebrating 100 years since some women were able to vote. 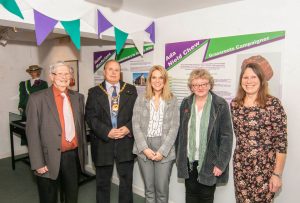 The display focussed on three women with local connections: Helen Macfarlane (1818-1860), Ada Nield Chew (1870-1945) and Gwyneth Dunwoody (1930-2008). The exhibition also included material on Nantwich’s contribution to the struggle for women’s suffrage and the role of the First World War.

The exhibition also had some interesting “Suffragette” Jewellery, that women had made for themselves with purple, green and white semi-precious stones – each piece was unique and was a sign to others of the cause she espoused.

The opening evening, attended by our President and our local MP, amongst others, was a great way to show our Soroptimist Club support for the exhibition, and was very enjoyable . 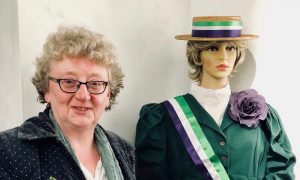 So starts the description from the production of this play we saw at The New Vic on Wednesday. Fun and friendship is one of our themes for this year, and this evening was a real opportunity to bring this to life. Originally a radio dramatization, it is based on the true story of four extraordinary ordinary women who protested against pit closures in the ‘90s. Here is what else the New Vic says:

“Anne, Elaine, Dot and Lesley. Four ordinary women, facing the closure of their community. It’s 1993 and the Parkside Colliery pit may be winding down, but they’re not giving up.

Their bras stuffed with contraband, they take a tour of the pit and refuse to come up. Settling into the depths of the mine, making tissue roses and walking imaginary dogs, they face bribery and threats. But as they dig in, those up top start to realise these ladies are not for turning.

This powerful play full of Northern wit by Maxine Peake follows on from the critically-acclaimed Beryl, and tells the true story of four women taking a stand in the face of a changing world.”

The play was laugh out loud funny at times, especially in the first half, whilst the women were getting themselves settled down the mine. The second half was more lively and inevitably more powerful as the women faced 4 days down on the cold and dark, with only coal sacks to wrap round them. It must have been a challenge to create the set as a convincing mine, and some of us found it a bit gloomy, and one-dimensional, and we wondered what the wandering miners’ role was as they appeared at various points, some with modern kit, others with Davy lamps from a previous age. Despite some clichés towards the end, the dialogue and drama of the story made it a powerful play, and reminded us that it is passion that drives courage and comradeship when a stand needs to be taken.

We certainly enjoyed ourselves and made an evening of it with supper at the theatre beforehand.