How are you all?

It has not been a pleasant week with so much rain, although our gardens certainly needed it.

Let me begin with some good news. The search for 100 4 100 outstanding Soroptimists to celebrate our centenary, has now been rebranded – #Whoisshe? and the panel met last week and have chosen the 100 plus Soroptimists who are to proceed to the next stage. Clubs who put forward their nominees should have received a message to this effect. I believe that Clubs in the Northern England Region submitted 14 nominations and whilst I would like to name them here, I am not yet aware if all 14 are in this select group. Once I know, I will be delighted to tell you their names. Only the Clubs will be aware unless they have informed Christine Lumsdon or myself. The next step is for a 500 word biographical note, plus a photograph, to be submitted to the panel, and these will be published in batches on the SIGBI Website over the coming months. It will then be for the panel to decide those who meet the WIKIPEDIA criteria for publication.

On Thursday last, I was privileged to attend a ZOOM Meeting with SI Middlesbrough members; how good it was to see so many familiar faces. They welcomed two guests from their Friendship Links, Nicola Harding from SI Harrogate and Reny Bhardwaj from SI Pune Metro East, India.

SI Middlesbrough will celebrate their 75th Charter Anniversary later this year and we drank a toast to the Club in whatever beverage we had brought to the meeting, tea in my case! There was then a fun quiz, organised by Kathy Warrick, in which all the answers featured notable women in history. It was so good to be with them for a short time.

A reminder about the ZOOM ‘COME DANCE WITH ME’ party which I mentioned in last week’s message. It will be on Friday 26 JUNE 2020 from 7 – 8pm and the picture shows that 65% of the target has been raised for the Nepal project. 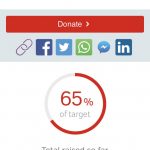 There is still time to join the party and enable Karen to raise even more for Women and Girls in Nepal.  I understand this has increased to 75% and may be more since it featured in the SIGBI Briefing on Friday]

I have news of another ZOOM event planned [not Soroptimist organised] and those of our members who take YOGA classes might be interested in breaking a record for the largest ZOOM Yoga Class. This takes place on Sunday, 21 June 2020 @ 10am until 11am. Proceeds are for Macmillan Cancer Support and details can be obtained from Vyvyenne Mack of SI Durham  vmack61@btinternet.com

Wouldn’t it be great to be part of a record breaking or making attempt?

Secretary, Cris Young has written to 5 major supermarkets about member’s concern for the demand on Food Banks all over the country which has increased by 89%. She is suggesting to Supermarkets that they put something in place where, when customers are online shopping, they could include products which can be donated with the rest of the items that in-store shoppers have donated for Food Banks. Link to Cris’s letter is SI Newcastle – Letter from Cris in case other clubs considered doing something similar in their own areas.

Members held a ZOOM meeting on Wednesday last, and made a decision to support LOST STOCK   http://www.loststock.com  [Karen has circulated some details previously.]

Due to Coronavirus, leading clothing brands have cancelled orders for over $2 million dollars worth of clothes that have already been produced, leaving millions of workers, in countries like Bangladesh, unpaid and at risk of starvation.

Members intend to each purchase a box of clothes for £35, in their own size and colour preferences. Every box supports a worker and their family for a week. Barbara Brown tells me that at their next ZOOM meeting they will be comparing their purchases. This sounds like it could be a virtual fashion  show and great fun!

Maureen, also of SI Darlington, has put together 4 Start-Up boxes for women leaving the Refuge.

Our Regional Immediate Past President, Shirley Hallam, has donated £70 to the charity from her Presidential year – STREETWISE YOUTH PROJECT, which has enabled them to provide 35 Children’s Activity Packs for local children in Newcastle; Shirley has also delivered materials on the The Bee Project to a local Primary School,

Congratulations to Margaret Clark who has been re-elected as SINE Federation Consultative Councillor for a further two years 2020 – 2022. She will be available to convey any of your concerns to the Federation Management Board.

I hope you will like the poem I recommend this week, which was written in March this year by Kitty O’Meara, an American lady, called – AND PEOPLE STAYED HOME Link to Poem

Quote for the week comes from LORI DESCHENE:

Maybe when social distancing is a thing of the past, we’ll hug a little harder, hold on a little longer and remember that nothing matters more than the the time we spend together with the people we love.

Until next week, Stay Safe and Keep Well.