Soroptimists are determined to ensure that all human beings can enjoy prosperous and fulfilling lives and that economic, social and technological progress occurs in harmony with nature.

Prosperity is often associated with thriving, flourishing, wealth and economic well-being. It is also associated with other factors like happiness and health. Our members work to facilitate the prosperity of women and girls around the world.

The 2030 Sustainable development agenda is structured around the five pillars of People, Prosperity, Planet, Partnerships and Peace (5Ps).

The following SDGs have been grouped under the heading of prosperity:

Below are some of the projects Soroptimists have undertaken. 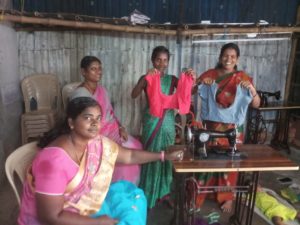 Soroptimist International (SI) Chennai has been working in an impoverished locality where a lack of education and job skills leads to unemployment and dependence on others, resulting in loss of self-esteem and abuse. They have set up a Vocational Training Centre for women in India.

“The joy on the faces of the women as they sat, for the first time, in front of the sewing machines was what we were looking for when we started the course”.

The Soroptimist club set up an after-school club and sponsorship programme for children. As a result, the women of the area approached the club and appealed to them to help develop an income generation scheme. Members spent time with the women finding out what sort of income generation scheme they wanted. After discussion with the women, it was agreed that a vocational training program would be a good way of helping the women become economically independent. The club sought the help of an Non-Government Organisation (NGO), Shine Trust operating in the area.

The project was launched on International Women’s Day 2018. Shine Trust provided accommodation for the training unit and oversight for running the unit. SI Chennai purchased five sewing machines and fund the employment of a sewing teacher. The course is one year, the women are taught pattern cutting and sewing for skirts, petticoats, simple frocks for little girls and embroidery.

Training alone was insufficient to improve the circumstances of the women. Wholesalers were approached, who agreed to source out some of their basic stitching jobs to the women. The club bought heavy duty, industrial sewing machines to assist with this. This project has gone a long way in helping the women stand on their own feet and hold their heads up with pride.

“It has been a delight for us to watch the women march ahead with entrepreneurial zeal using this initiative as a springboard to economic independence and fulfilment.”

Soroptimists dealing with the impact of climate change

Climate change and the negative effects it brings with drought or floods around the world will continue to impact on people’s prosperity. 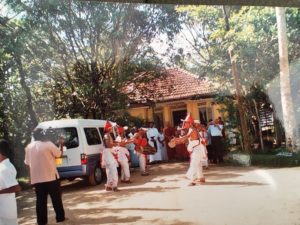 The Sangamith Community Centre, Pavagala, Sri Lanka is the result of work by Soroptimist International (SI) Ormskirk, SI Bootle and District and SI South Lancashire following the tsunami in December 2004 when 30,000+ died. The centre provides a meeting place for the community. There are clinics, health workshops, educational classes, a lending library and accommodation for schools on educational trips.

A Soroptimist had family and friends living there and after visiting them, seeing the devastation and hearing their stories she wanted to do something to help.  Back in the UK with the support of the Soroptimist club members, they formed a Tsunami Action Committee to raise funds, and raised over £19,000 to build the centre.

A local monk agreed to donate land from the temple premises for the centre. The monk provided oversight of the construction. The construction provided jobs for many but some offered their services free. As soon as the walls and roof were completed, by the end of 2006, the hall was put to good use before the official opening in 2009. 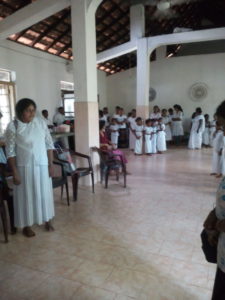 On each visit, the Soroptimist member takes clothing, toys, toiletries and educational items including books and writing material. She also runs health workshops.

Members of the village community are encouraged to sell their garden produce at the centre. Looking forward the community are considering climate action including recycling and tree planting.

Soroptimist International (SI) of Great Britain Ireland (SIGBI) is a member of Fairtrade. Every year Soroptimist clubs around the country support Fairtrade Fortnight, held in February/March. The aim is to continue with the mission to ensure that all farmers are paid fairly for their work and are able to earn a living income, starting with cocoa farmers in West Africa. The focus is supporting women farmers.

Fairtrade works with farmers in a cooperative to ensure they are paid a minimum price for their produce and that they also receive the Fairtrade Premium. This is an additional amount of money which is paid to the cooperative to be spent on local community projects like improving health care, clean water or a primary school. 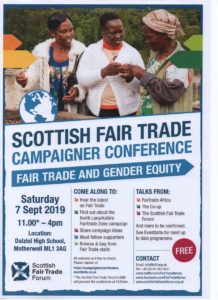 A member of SI Hamilton was invited to become a member of the North Lanarkshire Fairtrade Zone Steering Group. The Group submitted a motion to North Lanarkshire Council  ‘This Council, as an important consumer and opinion leader, should research, develop and support a strategy to facilitate the promotion and purchase of foods with the Fairtrade Mark to give marginalised producers a fair deal.’ Work by the Steering Group is ongoing.

Following a conference and heightened awareness, South Lanarkshire Council which had achieved Fairtrade Zone Status in 2013 reapplied to renew their status.

Raising awareness of Fairtrade in school

SI East Grinstead wanted to raise awareness with school children that Fairtrade is about better prices, decent working conditions, a living income, local sustainability and fair terms of trade for farmers and workers in the developing world while caring for people and planet.

The Club developed a training session for children so they have an understanding that Fairtrade is a simple way to make a difference to the lives of the people who grow the things we love. The easiest way to do this by using Fairtrade products; chocolate, bananas, coffee, flowers

Over three weeks SI volunteers, supported a local school develop a role play assembly as a fun way to tell the story of the cocoa farmers living by the edge of the Gola Rainforest in Sierra Leone.  It was performed by a group of eco -club pupils to the rest of the school. Fairtrade products were shown to illustrate that it isn’t just chocolate that needs support.

This year (2020) the eco-club learnt about cocoa so they could tell the whole school and their parents. Their story was published in the school newsletter.

Reducing inequalities and ensuring that no one is left behind are integral to achieving the Sustainable Development Goals. Soroptimist undertake a number of initiatives to help women and girls improve their economic status. 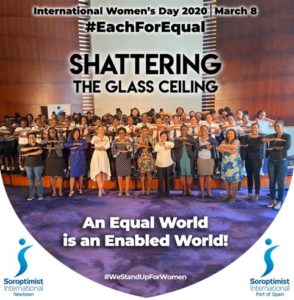 Women make up half the world’s population and an increasing number of women are entering the workforce every year. However, every year from being recruited to being promoted, women face barriers in the workplace. In spite of the discussions about diversity and inclusion, women in leadership roles are still in the minority.

A Life Coach, gave the Opening Remarks, setting the scene for each keynote speaker. The keynote speakers were: A Senior Wells Engineer at Shell Energy T&T Ltd (Science), An Owner of Custom Design Steelband Pan Cases (Entrepreneur) an Artist and the Head of Finance, Scotiabank T&T Ltd (Finance).

The panel shared their personal stories of professional growth and success, proving there are paths to leadership in their industry and what must be done to continue to have gender equality in the workplace.   The committee was able to gather exit surveys from all participants which will be analysed to make recommendations for future projects. 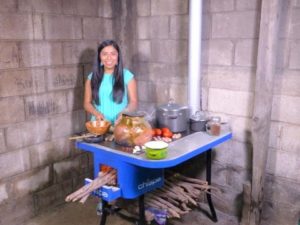 Transferring cash to women or providing microloans to set up a business promotes women’s leadership by empowering women who might not otherwise have access to money to make spending decisions.

Soroptimist clubs support women around the world by working with organisations which can provide loans to enable them to start their own businesses.

SI Barry and District partnered with Kiva.org to provide loans to women around the world.

The club has also worked with Year 12 students to raise their awareness that children in other parts of the world often have fewer opportunities for education and employment due to poor economic circumstances.

Clubs work with organisations who can facilitate financial loans, contributing small amounts of funding towards a grant to the individual woman for her business. SI Paisley, Scotland working through LendwithCare are supporting Santos in Ecuador who is expanding her fruit and vegetable business. She is a single mum with family to support, plus Ariana in Ecuador who runs a shop selling underwear and wishes to expand this so she can earn more to pay for her University studies.

Get involved, join Soroptimists and make a difference.