Members of SI Dundee took part in Dundee’s 4th Reclaim the Night. WRASAC was delighted by the turnout for this event.

The march was through Dundee City Centre with representatives of many Women’s organisations in the City asking that ‘Violence against Women’ is stopped Now.  Those participating in the march were asked to contact their MPs and ask them to attend the House of Commons on 16th December to ratify the Istanbul Convention calling for the elimination of violence against women. 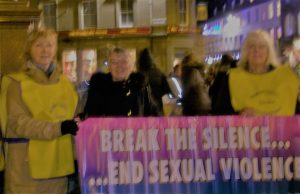