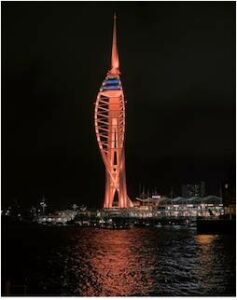 In association with sister Soroptimists from Winchester, we will be lighting up the Spinnaker Tower in orange on Monday 28 November to create awareness of the campaign to end Domestic Violence against Women and Girls (VAWG).

Soroptimist International ‘Orange the World’ campaign runs from 25 November, which is International Day for the Elimination of Violence against Women.  That date was originally White Ribbon Day, when men and boys declared that they would never commit, excuse or remain silent about men’s violence against women.  From that date, there follows 16 days of Activism, which ends on 10 December, UN Human Rights Day.

Dame Vera Baird, former Victims’ Commissioner with whom we have worked closely on Domestic Abuse courts said, “Great that the wonderful Soroptimists support this campaign and raise awareness of domestic abuse against women and girls.  With education for boys and girls and a wider understanding of how this affects lives today, there is much to be done to change attitudes.”

Caroline Nokes, MP for Romsey and Southampton North, and Chair of the Women and Equalities Select Committee, said, “I am so pleased to see the campaign by Soroptimists International to ‘Orange the World’ and highlight the dreadful toll of violence against women and girls.  This November the 25th we will come together to mark White Ribbon Day, and continue the work to stamp out gendered violence.  It is great to see local Soroptimists so involved and the Spinnaker Tower turning orange.”

Penny Mordaunt MP for North Portsmouth and Leader of the House of Commons said, “Raising awareness is vital to get messages out to people, enabling them not only to know how they can get help, but to also recognise VAWG, which for some has become normalised.  I hope the lighting up of our iconic landmarks will help achieve that aim.  My thanks to all involved.”

Throughout the 16 Days of Activism there are opportunities for Soroptimists to wear orange and start conversations about the campaign against gender violence.  The range of topics under this heading include domestic violence (physical, coercive and controlling behaviours), but also FGM, trafficking, spiking, stalking and forced marriage.

It is also a chance to introduce the wider Soroptimist mission to transform the lives and status of women and girls through education, empowerment and enabling opportunities. 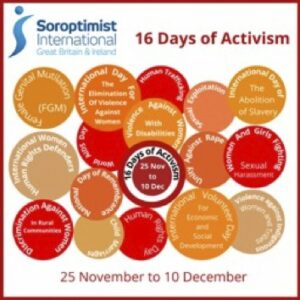 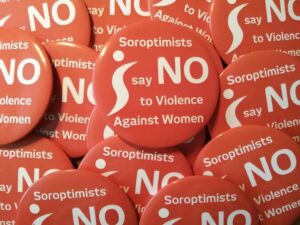 SI Solent East has supported the local Women’s Refuge, and Contact the Elderly.  The club has also been involved in a Domestic Abuse Court Observation Project over the summer to establish how the court process works in these cases.  The local data will be added to other observations from around the country, and a final report will be published later this year.