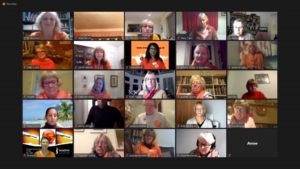 Soroptimist International of Southern England welcomed members, guests and  Speaker, Nicole Jacobs, UK’s Designate Domestic Abuse Commissioner to their ‘Orange Your Neighbourhood‘ event on 3rd December 2020.   The event was held as part of what is known as the ’16 Days of Activism Against Gender Based Violence’ between 25th November, the International Day for the Elimination of Violence against Women, and 10th December, Human Rights Day.

Since her appointment to the role of UK’s Designate Domestic Abuse Commissioner in September 2019, Nicole has begun energetically putting her 20 plus years of experience in domestic abuse policy and intervention to work, driving improvements to transform the response to domestic abuse in England and Wales. She is committed to championing victims and survivors of all ages, status, and backgrounds, and to shining a light on practices that fail them.

In her live presentation Nicole explained the purpose of her role and its priorities and the importance of the Domestic Abuse Bill currently going through Parliament and her subsequent objectives related to it.  See the power point presentation here – Domestic Abuse Commissioner Nicole Jacobs Presentation December 2020

Soroptimists Believe to Achieve Zero Tolerance against Gender Based Violence.

See how some of our clubs #OrangetheWorld ... SI Epsom, SI Woking,  SI Salisbury.

As Regional President of Southern England, having taken over only at the end of October 2020 from Barbara. I was looking forward to working with Barbara as my Immediate Past President. In light of the sad events of this week this will not be possible.

We heard that just a month after stepping down from two inspiring years as Regional President, Barbara passed away in her sleep. It is with much sadness that we heard this news.

Barbara joined Soroptimist International Epsom club in 2000 and throughout her twenty years as a member held several roles including President twice, Programme Action Officer, Secretary and Communications/Website co-ordinator. She became Region President in 2018, and due to no-one being President Elect she continued for two years. She finally transferred to SI Woking and District in March 2020.

Barbara has been a committed Soroptimist and will be greatly missed by Region and her club. She had an unshakeable ‘can do’ attitude, passion and great enthusiasm, which can be seen in the VIP project which we continue to move forward in her absence. The Volunteering in Pretoria project was featured in our last region meeting, and I am so pleased that she was able to participate in this and talk to the girls involved along with SI Tshwane. We will continue this project as much in her memory as in progressing the development of the girls’ education. Club members and close friends will miss her dynamism and passion.

Her most recent challenge was to start looking at setting up a club in Sutton, since the closure of SI Reigate some time ago, the area lacks a local club and Barbara saw this as an opportunity. Our Regional Membership Officer Liz Batten will follow up on this.

Our thoughts are with her husband and family at this very sad time.

Members of SI Southern England welcomed their newly elected President, Julie Blackwell, at the annual federation conference.  They raised a glass via ZOOM!

Four members of Southern England Region joined the SIGBI Development Day in Nottingham at the beginning of June. Right to left: Regional Secretary Diana Porter, Regional PAC Chair Ana Williams, Regional President Barbara Watts and Liz Batten took part in the interactive day which looked at strategies for recruiting and retaining members in our Clubs. Phase 3 of the Federation Growth Plan was launched and presented in the afternoon and all resources are now available on the SIGBI website. Any of those who attended are happy to share the learning and information they gained at the event with members.

At the late May Bank Holiday Family Fun Day members again supported the ‘fun float’ event as marshals and the new Club fielded a team to take part in the first ever Duck Race on another of Salisbury’s five rivers. A very wet but hilarious time was had by all. Congratulations to our team of Penny, Eleanor and Louise who claim to have really ‘got the hang of it’ after coming second in their second race, ready for a strong challenge next year, perhaps?

However from April 2019 this will leave SI Winchester with reduced numbers. We have therefore embarked on a recruitment drive which we hope will make us more Winchester-centric.

On Friday 8 March, International Women’s Day, we were able to set up a display stand in an area of the Hampshire County Council offices (in Winchester) known as The Street. This is an area close to the cafeteria where we were positioned from 12-2pm over lunchtime and were able to talk to quite a few ladies over this period.

It was interesting to learn how many commuters to Winchester work from these offices so we were able to spread the word about Solent East and Southampton clubs. Gina Bird and Julie Blackwell manned the stand to talk about the Winchester projects and SIGBI as a wider topic. We hoped that this created awareness of the organisation and our club in particular, it would have been too much to hope for to get any commitment at that time.

The following day 9 March we held a much publicised event (newspaper/posters/social media) in the Quaker meeting house with coffee and cake. The attendance was minimal but we took details of five ladies, two of whom have since been to a supper meeting. We hope to run this again later in the year, having learned that a higher profile venue would be better and to ensure we have a full campaign in action.

Soroptimist International of Winchester were delighted to receive notification of a donation from local motoring club Alresford Allsorts. The sum of £350 was presented by Gordon Cooper to Julie Blackwell of SIW at Bramdean village hall, which gave the opportunity for some of the Allsorts members and vehicles to be present.

SI Winchester supports local charities including Trinity House in Winchester and the Women’s Refuge as well as international and overseas charities which the SI organisation supports.

Julie Blackwell said, ‘The Allsorts have requested the donation to be sent to the Women’s Refuge in Winchester and as our club already supports this along with Trinity House, the day centre for domestic abuse victims, this is a generous gift from their members and will doubtless be much appreciated.

The Allsorts were looking to support the Refuge so this is a perfect match. The motoring club has been in existence for over 30 years and has a membership of over 50 with a range of vintage and classic vehicles. It raises money for local charities and SI Winchester is happy to facilitate this for the Refuge. To date SIW has donated to the Refuge by way of 2 x £100 Tesco vouchers.