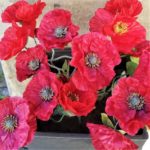 BBC Asian Network marked #RemebranceDay with  a look at the South Asian women who contributed during the First and Second World Wars. Author Anita Anand taled about  renowned suffragette Princess Sophia Duleep Singh and how she helped injured soldiers in Brighton.

Acupuncture can bring relief to patients in pain.

The balloons will fly virtually over the Serengeti Park.  There are prizes for the balloons that go highest and furthest.

Women who made a difference

BBC Radio 4’s Woman’s Hour Power List 2020: See their take on seven women who made a global difference.  About this and more here

The Woking Debates meeting in early November 2020 took the theme ‘Should we all become vegan’.  The discussion was both lively and informative.   As always, things are more complicated than they seem.   The speaker talked about the burden placed on the planet by the way we eat.  We should live within the limits of our planet and that includes what we choose to eat.  See the WWF report on Planet-based diets.   From the nutritional point of view, humans are not all the same and it is important to learn more about what we are eating and where it comes from.  Then we can make properly informed choices.  To see the debate in full, go to Woking Debates website and YouTube channel.

An article in the Evening Standard concerned Romanian women trafficked for sex “UK has become a ‘pump’s paradise’ for sex traffickers, senior MP warns as she calls for website ban”. Find the article here

Healthy Surrey published a report by Unseen about the links between Covid-19 and Modern Slavery.  Find it here.

It’s that time of the year again!  In some African countries, December-January is the season for traditional initiation ceremonies.  This is when boys and girls are considered to be approaching adulthood and certain rituals should be carried out.  For girls, this is often Female Genital Mutilation (FGM).

And Global Giving published an update on the campaign led by Rhobi Samwelly in Tanzania.  Together with Tanzania Development Trust, we have supported Rhobi’s work to persuade parents and communities to replace the ‘cutting’ (FGM) with non-violent alternatives. Read Rhobi’s update ‘250 more girls at risk in imminent cutting season’ here.

The government has published news of a month-long campaign ‘Something’s not right’ in response to the rise in domestic violence during the pandemic. Find the details here

BBC News published two items on domestic abuse at the end of October 2020.  The first was about a chatbot that is being used to help the victims of domestic abuse.

The second article concerned the winner of the Pride of Britain award.  Rebecca Beattie was a victim of severe domestic abuse for five years.  But she managed to move on from that experience and found an ethical clothing company.  Find these articles here.

Exhibitions about women making a mark

A new exhibition has opened at the National Gallery.  It showcases the early Italian female painter, Artemisia Gentileschi.  She is now achieving full recognition as an outstanding artist.  The exhibition will continue into next year.  Well worth a visit, when lockdown is over!   More information and booking here

And the British Library has an exhibition about the rights women have won since the time of the suffragettes.  This exhibition echoes what our eminent speaker, Lady Hale, said at our recent national conference.  Entitled ‘Unfinished Business’, it also continues into next year.  For more information, visit the British Library site here.