The main event of the decade was the chartering of the Woking Club in 1976!  Surrey had several Soroptimist International Clubs by the 1970s – in Reigate, Epsom, Kingston, Elmbridge, Guildford…. For several Guildford members, Woking was a better place to meet. So they began to look for additional members and a suitable meeting venue in 1975.   For a brand new Club, a brand new venue: Centre Halls, part of the extensive redevelopment of Woking in the early 1970s (photo: Surrey Advertiser Archive).

The new club was formally chartered in April 1976.  Sheila Jerred was elected first President during the Chartering Ceremony and wore the newly-created chain of office.  Another new tradition:  a blue tablecloth embroidered with the names of all members – which we still do today.

Woking was not the only place to start a new Soroptimist Club.  Clubs were springing up all over the world and especially in the Pacific.  So in 1978 a new Federation – SI West Pacific – was created, making a total of four. 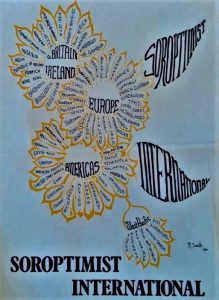 In 1971, Soroptimists had notched up fifty years of community service. Soroptimists cooperate with voluntary organisations, rally round individuals with specific interests and respond to emergencies.  Many needs are constant: help for young people, vocational training, help for people in difficulty (the elderly, the disadvantaged, the disabled), health issues.  During the 1970s, there was renewed emphasis on drug addiction, pollution.

During the decade, Soroptimists responded to two problems specifically affecting women: The national Federation launched the Diamond Education Grant in 1972 to support women returning to education.  Last year there were 200 applications, 70 women received funding.   Erin Pizzey established the first Women’s Refuge in London in 1971.  This meant that women experiencing violence at home now had somewhere to go.  In 1974 a national  body, the ‘Women’s Aid Federation’ was formed, uniting refuges across the country.  In 1979, SI Salisbury successfully set up a local Women’s Refuge.  Since then, Soroptimists in Surrey have consistently supported Your Sanctuary, the successor to the first refuges.

1970 saw the launch of the Women’s Liberation Movement (WLM) which voiced demands for women such as  equal pay, equal educational and job opportunities, free contraception, free 24-hour nurseries.  The debate on these and other aspects of women’s lives continued throughout the 1970s.

An important law to protect women’s rights cane in :  the 1975 Sex Discrimination Act which made marriage an illegal reason for discriminating against women.

Internationally, in 1976, the UN set up UNIFEM, the United Nations Development Fund for Women. It merged into UN Women in 2011.

The Department for Health and Social Care is working on a new health strategy for women.  This is an opportunity to help shape the services that will be there for you in the future.  You can contribute by completing the online survey here

Epsom now has a statue of Emily Wilding, the Suffragette who has come to symbolise the struggle of women to have the right to vote.

Many congratulations to Surrey Minority Ethnic Forum (SMEF).  SMEF has received a Queen’s Award for the work it does in the county to help ethnic community groups.  SMEF stimulates discussion, helps people to settle, provides information about health issue and much more.

The June edition of Surrey Matters, Surrey County Council announced a most welcome new policy: Making period products available to those that need them. This may not be a large-scale development project – but it the long run it can make a big difference to women’s lives and careers.

Alas, the government is not reducing the number of women in prison as we hoped.  Nor is it meeting its Female Offender Strategy commitments, says the Prison Reform Trust.