The Clubs in Southern England commissioned a stained glass window for Guildford Cathedral.  It was dedicated on 6 September 1981. 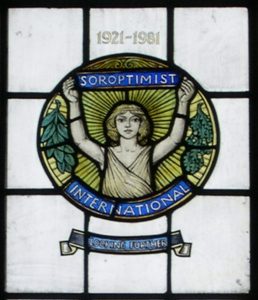 1984 saw the launch of the Soroptimist International  President’s Biennial Appeal. Clubs around the world contribute to the chosen campaign for two years.  The results are always impressive in terms of the funds raised and results on the ground.

Projects and appeals come and go, but the fundamental mission and values of Soroptimist International remain the same:

At the SIGBI Federation Conference in 1991, President Jane Dowell of SI Taunton reminded members that the best way for Soroptimists  to reach their goals is to serve communities everywhere in a spirit of friendship.   And Soroptimists gain a broader outlook on world problems because they can speak directly with their sisters in other countries.

1983 – SI Woking’s Community Service Project was to set up a Town Twinning Link for the Borough of Woking.  Members were instrumental in establishing the Woking Town Twinning Club (now the WTTA) and served on the committee for several years.

1988 – After looking for nearly three years, Salisbury Soroptimists found a suitable base for their proposed Women’s Refuge.  Beckingsale House was established and run for several years by a management committee that included five Soroptimists.

Soroptimists in Elmbridge and Woking helped to fund the first bone scanner (to detect thinning bones) for St Peter’s Hospital. The scanner was installed in 1991.

During the 1980s, women expected to have jobs and careers. Soroptimists championed career guidance for girls (our members recall a definite lack of choice in the careers suggested to girls before that).  The Economist magazine remarked in a July 2021 article: “Feminism arrived late last century, when the publisher [Mills & Boon] advised aspiring authors that the heroine ‘need not be a career girl’, but might have a job, even an ‘unfeminine-sounding one’, such as doctor”.

During the decade, some women broke through:  Jennie Murray started to present Woman’s Hour in 1987.  Our long-serving member, Anne Ansell, was Mayor of Woking in 1989-90.

The thorny issue of ‘home duties v work duties’ began to raise its head.  One of the speakers in the SI Woking 1985-6 programme talked on the topic of ‘A Woman’s Priorities’…

There were calls to reduce discrimination and underlying biases in a variety of sectors.  Soroptimists pinpointed a lack of equality in sport.  The members of SI Staffordshire Moorlands did a survey of cars to see if they were designed with women in mind – still a live topic today!

If you are in Surrey and you have mental health issues, you can self-refer to get help quickly.

Dr Gisela Unsworth of MindMatters told us at our July Soroptimist Action meeting how the NHS is improving access to psychological therapies in our area.  A wide range of help is on offer and MindMatters aims to respond to a call for help within days.

The UK government is preparing a new law. (the Police Crime, Sentencing and Courts Bill).  Soroptimists are concerned about the extraction power clauses in Part 2 Chapter 3  because it will not treat rape victims properly.  More here

You can get help and advice are available from:

Congratulations EdUKaid!  EdUKaid has won the 2021 UK Charity Governance Award for ‘Improving Impact in Small Charities’. The award recognises the contribution of EdUKaid’s trustees.  They have really helped to sustain the efforts of the charity to transform the lives of vulnerable children in rural Tanzania.  SI Woking supports the Heshima Project of EdUKaid.