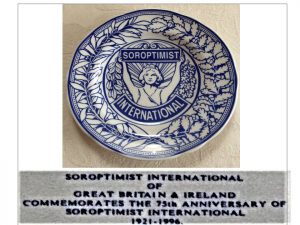 In 1996, when Soroptimist International celebrated its 75th anniversary, it had consolidated its position on the global stage,  Soroptimists were part of the global movement campaigning for gender equality. They spoke up for women at the 4th World Conference on Women in Beijing.  They lobbied especially for women and girls to have access to basic education and equal access to higher education.

By the 1990s Soroptimist International had well-run international programmes of work and assistance.  The 4-year Federation projects launched in 1978 were now a regular feature.   Their worth is demonstrated by the 1995-9 SIAM (Soroptimist International AIDS Mediation) project, which was still producing good results in 2012.   With these projects, and with the Soroptimist President’s Biennial Project (since 1982), Soroptimist Clubs across the world raise funds to achieve the common goal.

Soroptimist International began as a movement that encouraged women to play their full part in society.   SI President Mrs Huitt said:  “Soroptimists joining hands together have great power in their united strength. if they work together through Service, Friendship, Good Will and Understanding”.

By the 1990s, , Soroptimist International began to focus on problems faced specifically by women, in response to global concerns and heightened awareness.

A successful project with long-lasting effects.  During the 1990s, tackling the HIV/AIDs crisis was high on the Soroptimist agenda.  The SI four-year project SIAM (Soroptimist International AIDS Mediation) in partnership with the Population & Community Development Association) in Thailand aimed to reduce HIV infections and help young women to avoid joining the commercial sex industry.

A review of the project in 2011 showed that villagers were still being helped in the target areas, scholarships were being given to students, the village development, Revolving Loan Fund and children’s banks were working well. These initiatives were successful in reducing the numbers of daughters sent away to make income for the families by selling sex.

During the 1990s, Woking Soroptimists worked with the Carr Gomm Society to establish and run Willow House in Woking.  It offered a home to disabled people for many years.  And from 1994, the Club ran a Woman in the Community Award.  For over ten years, a woman in the Borough was chosen for her volunteering services.  Katharine Heatley was the first winner in 1995. 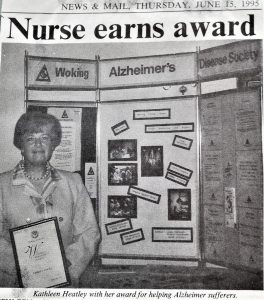 Since 1976, SI Woking has given support to these local health charities

‘Power dressing’ – during the 1990s,  women could be seen more frequently in the corridors of power and in the higher levels of companies.  But were they really accepted?  Women’s office wear from the late seventies, through the eighties and into the early nineties, reflected their need to ‘look more powerful’ in a man’s world.

At the same time, efforts to improve the lot of women intensified.  For example, Soroptimist International lobbied in favour of access to basic education and equal access to higher education for girls and women.

The refuges for women fleeing domestic violence established in the seventies started a movement that led to a global recognition of the problem of gender-based violence:

In 1991, the Center for Women’s Global Leadership established the ’16 Days of Activism Against Gender-Based Violence’ campaign – Soroptimists mark these days every year.  And at the end of the decade, in 2000, the United Nations General Assembly decided to make 25 November the International Day for the Elimination of Violence against Women.

1995 marked a turning point in the global campaign for gender equality because the Fourth World Conference on Women in Beijing defined strategic objectives and actions to help women. Governments recognised that women do less well in relation to all measures of poverty; education and training; health; violence; armed conflict; the economy; power and decision making; institutional measures; media; environment; the girl child.

We have been on the trail of famous women of the past.  A guided walk around peaceful, Grade I listed Brookwood Cemetery led us to discover some of the talented and doughty women who are buried there.

Florence Wallace Pomeroy, Viscountess Harberton, 1843–1911 was a British campaigner for dress reform. President of the Rational Dress Society. Its members wore a short skirt when out walking, for example, rather than a skirt that trailed on the ground, collecting dirt.

Henrietta Rae, 1859-1920, painter (notably of Florence Nightingale as The Lady with the Lamp)