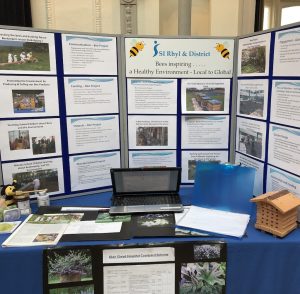 On 19th February 2022 our Region: Cheshire, North Wales and Wirral, held a Conference at St George’s Hotel, Llandudno about Climate Change, with local speakers from education, politics and charities.
The first Barbara Dixon Soroptimist project meeting competition was held and, after careful consideration, it was won by SI Rhyl and their Bee Project.
Rhyl Bee Project

Some things that were said:-
Llandudno will be underwater in 50 years.

Saving the giant redwoods in California was the first project Soroptimists worked on and they were saved – in 2020 they are at risk of dying due to extreme drought.

Annie Merry commended us for having a voice ‘at the top table’ to influence the UN.

The Soroptimists were challenged to lobby to shut down tax havens as this would help climate change action and social justice.

The Wildlife Trust said it would take 100 years to restore all peatlands in Wales at the current rate (peat is a more valuable store of carbon than trees).

This is a nature emergency as well as a climate emergency – we need a biodiversity reversal.
For more information:
Climate Change Conference