Congratulations to Irene who came joint fifth in the SIGBI Big Story competition to raise money for Empowering girls in Nepal.

She wrote about her early life for the Big Story project raising money for the Nepal project.

Here is her story. 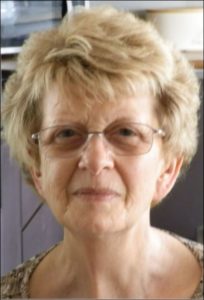 My life might have turned out much differently, had my Mother married her first love, a young man named Stan, who she had met in London to where her family had moved from her birthplace in Wales during the war.

It was many years before Mother learned, from her younger sister, that her letters to Stan, sent to serve as a soldier, had, in fact, been replied to, but had been intercepted by her Mother, my Grandmother, who considered Stan not to be her preferred suitor for Mum.

It was whilst feeling rejected by Stan that my Mum met my Dad, in London having been demobbed from his Army service.

So started my Mum’s life in Barnstaple, North Devon, my Dad’s home town, and a place that Mum had trouble accepting as her home.

Born into a turbulent family – Mum spoke of her Dad bringing home a goat from the pub once, and in fact it was in a pub that he took his last breath – there were also tales of my Gran’s many ‘friends’ that stayed with them as lodgers.

There was much partying, dancing, and of course, singing, with both of my Grandparents being Welsh.

Stories of her early years had Mum telling of how she and her siblings were taken around the streets of Hendon, looking in the windows of houses to see how other people lived, and of how she returned from school one day to find that the family had moved – the reasoning for the swift exit can only be guessed.

Mum took solace in her dancing, and told of her travels through London, alone, at a very young age, to attend dance classes, and later of being part of support dance groups to dance bands, including that of Ted Heath, very popular in his day.

I suppose that, with Stan being ‘gone’ from her life, and my Dad being a way out of the disruptive life she was leading, the thought of marriage and moving away, although that meant leaving her parents and six siblings, was attractive – and so came the move to Devon.

She never got used to the quiet of Barnstaple, the insular way of life of its inhabitants, and the lack of a social life.

My Dad, however, was happy with his lot, and brought his bride back to a poor area of the town, demolished later to make way for a shopping centre.

My Dad’s childhood, to my sisters and me, is still sketchy, despite numerous attempts to trace his past, and with a good friend sourcing information from records of the day, but there are stories of poverty, the workhouse and children being taken into care having been reported in the local newspaper of that time, all of which involve the life of his Mother.

I have a memory of being taken, as the eldest, to visit my Dad’s Great Aunts in an affluent part of the town, so his heritage was definitely that of two very different halves.

My Dad, for his own safety, had been brought up by a ‘maiden lady’, Sarah Hill, and it was to her home that Mum and Dad moved from London.

Soon afterwards I was born in that house, in the year after the War ended, and my claim to fame is that it was the last one standing when the whole area was demolished.

When a council house in the same lane became available, we moved to this, sharing washing facilities with all the other families in the ‘court’ as the area was called.

My two sisters were born whilst we lived here, with two years each between the three of us, and we remained there until I was seven years old.

My memories of that time are of there not being much food to spare, of having a bowl of boiling water tipped over me accidently, by my Mother, when I stood for the first time – the scar on my shoulder was an embarrassment to me in my formative years – and of a man that stayed with us and had a false leg, which, of course, we didn’t understand as being a result of the war, but was a fascination to the gang of us children that he let watch as he removed it.

The demolition of our home came at the same time as the building of a new council estate on the outskirts of the town, and it was to a brand new house that we moved – one with a dining room, and a garden, although it was a long time before we could afford luxuries such as a stair carpet.

My lifetime dislike of school started at this time, as I had to come to terms with the change from a small Church school where all the children had similar lives to a school that encompassed a catchment area of more affluent families, those that had more electricity-run items than just the lights – a comparison that took place in the playground once, one that I still remember the embarrassment of sixty five years later.

Money always having been short, we were used to my Mother  and Father having two jobs each – she as a machinist by day and a waitress by night, and he a labourer by day and a fisherman by night.

That worked when we lived in the town, but with time taken in travel to and from their jobs, and no chance of any money for transport, they became like ships that passed in the night, and rows ensued.

My Mum was accused of spending too much time at her waitressing, and perhaps she was, but she enjoyed the company that used the café in which she worked – some of these being American servicemen from the nearby Air Force camp.

Once she was asked, by a friend, to go to a dance, which she did – only to have the heels of her stilettos broken off by my Dad on her return.

Thus the years of what we now know as domestic abuse started, with many of the rows being about money, with my Mum wanting nice furniture such as the women that she worked with had, and my Dad’s earnings that of a labourer – not much further up the ladder than that of newspaper roundsman that appears on my birth certificate.

I’ll never know whether it was because my Dad had no stability in his childhood or because he failed to come up to my Mum’s expectations, but he became an angry man, who often took his anger out on us.

There wasn’t much physical violence, although I did have a chair broken over my head once, and stood between him and Mum whilst he brandished a carving knife, but the verbal abuse was vile, and constant.

My sisters and I used to lie in bed with our hands over our ears whilst he called Mum the most unacceptable of names – and when he sang at the top of his voice we knew the signs weren’t good and there was a storm brewing.

The weather, we always thought, was an indicator to what was to follow, so a new moon or a full moon in the forecast always filled us with dread, as it was at this time that he would explode, break things around the house, and set on Mum.

We children knew what to do – we would go to our neighbour next door and one of us would be to fetch Auntie Lil, Dad’s step-sister who lived on the estate, and who was the only one who could calm him down.

The change in the moon being monthly, it was with dread that my sisters and I waited for this predictable time.

There were peaceful times, when we enjoyed the hard work that he had put into growing vegetables in the garden, and when Dad dried our hair on a Sunday evening, whilst we sat on the floor between his knees, but these were few and far between.

There was also music and some fun times, but these memories are overtaken by those of sadness.

Being the oldest child, and not the son that my Dad had wanted, left me open to his abuse, and it was strange that, later in life, we became as close as we did, but it took for him to become vulnerable with age and illness for this to happen.

I’m sure our Dad loved us in his own way, and he was very proud of the achievements of the three of us as we met our partners and had our children.

My middle sister and I speak often of our childhood, but our younger sister has little memory of this time.

We consider that this was because by the time she was born, the War further behind us, things became a little easier, money-wise,  and so it was she who went on school trips and had piano and elocution lessons, something that middle sister and I hadn’t been afforded.

Our Dad passed away at the age of seventy and Mum met, and married, a lovely man with whom she danced until the day before she died.

Our children, and grandchildren, too, only learn of our past through our stories, as our parents were good Grandparents, proud and attentive – as we hope we are, not having known our own – and our shared experiences have certainly ensured that, as sisters, we are as close as we could possibly be.

My experiences have led me to volunteer, for many years, with organisations that work in the areas that affected me as a child.

Having been a victim, I have an understanding of how it feels to be afraid, and becoming a member of Soroptimist International has enabled me to join with others to make a difference to the most vulnerable of society.