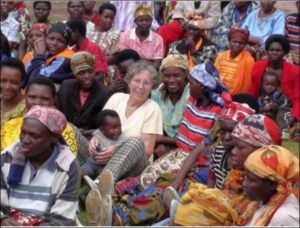 Following a visit to the Virunga region of Rwandain 1977, Dorothy Rundle ( known as Deri), horrified by the poverty and deprivation mainly due to genocide and following war, returned to the UK and established the David Rundle Trust in memory of her husband.

The aims were to supply clean water, education, housing, health and family planning.

Water projects initially included building a basic water tank to collect rainwater from a school roof, and the construction of a 3 km pipe line connecting a spring to two villages, with Deri a hands on overseer assisting volunteers using basic materials and tools.

By 2015 the Trust paid the statutory requirements for 145 children. Orphans progressing to higher education diplomas or degrees were supported, and the more practically biased were found apprenticeships and given the necessary equipment to enable them to become self employed.

The need to introduce family planning was cautiously approached initially with the women. Conversations on birth control and HIV/Aids, with increasing interest from further afield, resulted in ‘The Birth Control Project.’

Detailed records forwarded to the authorities, was the catalyst for free contraception available to all women with a health card. Meanwhile, the Trust financially supported those unable to afford  one.

Medical care required arduous journeys by foot or bicycle, and was only available for families who could afford to pay. Initially, Deri used a first aid book and kit, Dettol soap and boiling water, when confronted with ailments and injuries which required intervention for survival. Transport and treatment costs were covered if necessary.

By 2015 a clinic was constructed and staffed locally.

Every year, Deri spent 3 months in Rwanda, paying her own travel and living expenses. Accommodation was very basic. She ensured Trust money was used wisely to enable progression and completion of projects.

The remaining months at home involved fundraising supported by Trustees and friends. Deri gave talks to groups, local media interviews, and her book ‘Never Again’ covers the history, and personal experiences in Rwanda.

Deri’s tireless and persistent lobbying has ensured some sustainment through the Rwandan Authorities.

Her legacy includes provision of drinking water to over 12,000 families, a small orphanage, a clinic, and house construction in the same vicinity, to encourage reconciliation between opposing families in the civil war.

One student gained a Masters Degree in Agronomy, and now works for the United Nations in Rwanda, helping farmers to fight crop disease.

Deri died in 2016 and the Trust closed according to her wishes.

However, her daughter has set up a new memorial fund to continue  similar projects.

Deri was awarded the first British Citizen`s Award for International Achievement in 2015, following nomination by her club SI Barnstaple & District. She was an active dedicated advocate of all our Soroptimist Principles, Mission, and Vision.