Soroptimist International has been celebrating 100 years of service around the world in 2021. At the beginning of October clubs joined together in a candle lighting ceremony to mark the beginning of Soroptimist International in Oakland, California. The start of this incredible active movement for women and girls was also celebrated with a huge global party over two days! 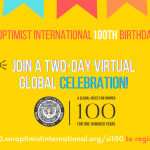 SI Edinburgh was not going to miss the opportunity of joining this enormous celebration so a representative group of members gathered at the Holyrood Parliament on a sunny but very windy day to light candles (electronic of course).  As we lit the candles we made  dedications:

President Nikki “We join our sister Soroptimist worldwide to celebrate our 100th Anniversary. We recognise with appreciation and thanks the enormous contribution made by our pioneering Soroptimists and all who have followed since. We light a candle for them and for our  Soroptimist International organisation today, as we continue to work together and strive for a ‘brilliant future for  all women and girls’”

Pat ” I light this candle for all the members of the Federation of Soroptimist International of Great Britain and Ireland and all sisters in many other countries in celebration of 100 years of SI sustained and committed service on behalf of women and girls everywhere.”

Following this a few intrepid souls headed off to find cake to complete the celebrations!

Soroptimist International will be celebrating 100 years of service around the world in 2021.

The SI Scotland South Card Set, created, & designed by Region Membership Officer Melanie Brickley, and developed by a team drawn from Clubs across the Region, was launched on International Women’s Day  where the theme was   ’ Choose to Challenge’. The Set tells the stories of many women who have ‘challenged’, providing an opportunity to celebrate women’s achievements within our Region.

This Set comprises a pack of cards and a booklet with biographical details of the women featured on each card, gives our Region the opportunity to mark 52 special women in a unique and original way. The end product is  a useful gift for a speaker, a memento to keep, to share with friends and with our Friendship Link Clubs”.

The cost of the Set is £8.00 including UK postage. Overseas orders will be charged at cost plus postage.

The Playing Card Project is not intended to be a Fund-Raising exercise. However, if there is any surplus at the end of the Project, it will be allocated to the SISSR 3S Fund. Details of the Fund are available on the SI Scotland South website.

For more information or queries contact Margaret Mowat on sissplayingcards@gmail.com

SI Edinburgh is almost as old – celebrating 94 years of service to our community in and around Edinburgh.

We are celebrating some outstanding club members over that time all of whom Chose To Challenge the Status Quo.

Helen to feature as one of the SIGBI Centenary #WhoIsShe campaign.

Who Is She Certificate – Helen Somerville

and on social media!

Helen was born 6 August 1890 in Edinburgh where she attended St Margaret’s College, and later Lavant Poste, Lausanne. She became a Governor of the College. She was the daughter of the Procurator Fiscal for Edinburgh, George Somerville.  Until 1934 she resided in Edinburgh when she moved to a house built for her grandfather in Aberdour, where she fully appreciated having an outlet for her passion as a keen gardener.

During World War 1 she began an apprenticeship in the family firm, D C Wallace and Somerville Accountants.  In 1925 she was fully qualified – the second lady in Scotland and first lady member of the Edinburgh Society.  She became a partner in the company with her brother Sir John Somerville.  In 1975 she celebrated her Golden Jubilee described as her ‘red letter day’ and acknowledged by David Flint, President of the Institute of Chartered Accountants. He was well aware of her encouragement of women in the profession and wrote ‘You must, I am sure, be particularly pleased at the women’s record in the Institute’s examinations in recent years when, as you know, in three years out of five recently the Gold Medal was won by a woman.’ 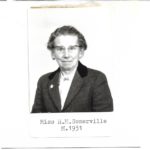 The first record of Helen in SI Edinburgh is a letter describing the hair- raising voyage on the Danube from Vienna to Budapest for the 1936 “Peace Week”, an early indication of her interest in the international aspect of Soroptimist.  Apparently the boat caught fire and their luggage was thrown overboard!

In 1938 the club recognized her financial acumen appointing her Treasurer of SI Edinburgh, a post she held till 1951.  This was the beginning of over 20 years service to the club, region, federation (vice president 1951- 52) and the international association.

In the years leading up to 1948 there had been discussions on the formation of a First Sister Plan to encourage correspondence and co-operation with Soroptimists in other countries. When it was agreed in 1948 to form the First Sister Club, Helen was chosen to be the first Chairman, a post she held till 1952.

Discussion had been ongoing about the constitution of the Soroptimist International Association especially concerning the Governing Body (the International Board). In 1952 it was agreed that the President and Secretary should be from one Federation and the Treasurer from another.  The first President and Secretary appointed were from the American Federation and Helen was appointed from the British Federation as the first Treasurer of the Soroptimist International Association.  She held the post till 1956.

All this service was acknowledged in 1960 by the award of Honorary Membership of the SIGBI Federation.

Helen was an active member of YWCA, sharing her expertise with other organisations where it was much appreciated.  She was a member of the Caledonian Club, the Scottish Women’s Club, the Cowdry? Club of London, the Dunfermline Floral Art Club and she was a Justice of the Peace for Fife.

She played hockey for Edinburgh Ladies but golf was a long lasting passion.  At Kingsknowe in Edinburgh she was captain and latterly at Aberdour Golf Club she collected many trophies, became a life member and as senior lady member was chosen to open the new club house in 1965.

Kate joined SIE in 1956 having been introduced to Soroptimism by Miss Gertrude Hertzfeld a founder member and second president of SIE.  Both were surgeons at the Bruntsfield Hospital – a woman’s hospital staffed by women.

In 1973 the International Board met in New York.  Following this Ethel Lord organized a special gathering which became known as the New York Friendship Days. This included a visit to the UN when SI had consultative status as an NGO. Kate attended this and combined it with a visit to Sioux Falls, one of our friendship link clubs of which Kate was correspondent.  She kept up this contact and welcomed any members who came to Edinburgh.

Kate was a great fundraiser for the club.  Her marmalade was a welcome sight in January as were her chutneys in the autumn yielding a goodly sum.

The college of Surgeons honoured her 90th birthday with a party.

Fortunately when Kate had to downsize she chose Viewpoint Housing Association.  First she had a flat in South Oswald Rd but when she required full time care she was initially moved to Lenon Rd and then much more to her liking to St Raphael’s Nursing Home where she died in 2001.

While still at school in York Molly owned a motor cycle which she was able to strip down and rebuild so it was not surprising that she should choose to study engineering at Edinburgh University.  During her studies she was advised to sell hoovers! So she opted for civil engineering.  She was the first woman to graduate with Honours in engineering.  Then followed a career with Blyth and Blyth, George St. where she designed bridges and became a partner in the firm.

When in 1977 the club decided to sponsor a child under the auspices of Save the Children Fund ((£350 for 7 years) and we were allocated Robert Kuman a Kenyan Molly was the initial correspondent due to her long service to scouting cubs in particular.  While on safari in 1980 with Kate Branson they met Robert at his by then boarding school Starehe in full uniform.

He showed them round the school and enjoyed a meal with them in their hotel where they had a very good conversation. Robert partly due to Molly’s influence joined scouts where he did well.  At school he also attained good grades and was eventually appointed school captain.  He gained entry to Nairobi University due to student unrest but he graduated with a first class Honours degree in 1987. After some industrial experience he went to the University of British Columbia where he did his MSc in Oceanography and possibly a PhD.  He had married Grace and was the proud father of twins. He always hoped to be able to visit Edinburgh and kept expressing his thanks for our club’s support without which he could not have achieved so much.  Molly supported him long after the seven years were up and from time to time she would invite members to contribute to the cost of something for Robert.  Unfortunately after Molly’s death contact was lost.  A full account of this is in the club’s newsletter for April 1991.

Molly was a member of the Ladies Caledonian Club so we were able to hold club meetings there for a number of years.  Due to her partnership in Blyth and Blyth we held our monthly executive meetings in their Board Room and were able to use their duplicating equipment – remember messy inking of Gestetner drums and turning the handle?

Molly was a keen photographer and raised funds with slide shows on for example the Galapagos Islands. She noticed that some members were reluctant to submit photographs for our ‘Rogues Gallery’ so she brought along a camera, sat the member down and charged a small fee for our charities.  Craft was another of her interests – a memorable Arran sweater caused much rivalry at a silent auction and of course her felt Noah’s Ark with its pairs of felt animals raised a goodly sum.

Molly was awarded an OBE for services to engineering in session 1979-80 and an honorary DSc from Heriot Watt University in session 1985-86.

Many of us attended the memorial service in her church, St John’s West End in 1997.  This was conducted by the Reverend John Burdett and Clephane Hume. As reported in the September 2018 SIEnna Clephane was present at the dedication of a plaque to be sited in the Sanderson Building at Kings Buildings.  This was to honour Molly as the first woman fellow of the Institute of Civil Engineers – a perfect example of STEM.