We had an action packed October Region meeting in London – with the AGM, a #VotesForWomen  presentation, a run through nominated “Women of Achievement” and a panel session on the United Nations Commission on the Status of Women (UN CSW). President Margaret’s theme for the Soroptimist London Chilterns Region year has been IMPACT and this event fully met the brief!

The photo above was taken with everyone present and many were wearing sashes and rosettes in the colours of women’s suffrage plus Irene Cockroft and Jen Simpson were in costume.

The AGM was first and reports will be sent to Clubs.

Our first speaker was Irene Cockroft with a fascinating talk with excellent photo images to illustrate “International Women’s Day, Now and Then”. This is in light if the centenary of the UK women’s vote and the fact this talk was cancelled in March due to the snow. Irene, a member of Soroptimist International Greater London, London Chilterns Region since 1997, is an independent exhibition curator, author and lecturer specialising in the history of women’s involvement in the late 19th, early 20th century Arts & Crafts and Suffrage movements. Irene’s inspiration in studying women’s history was her great-aunt, suffrage artist Ernestine Mills (1871-1959) who worked in many mediums including highly-skilled enamel-on-metal. Mills was a founder member of Soroptimist International of Greater London, chartered in 1924. For more about Irene please see this page of the website www.sigbi.org/london-chilterns/2018/03/16/iwd18/ Irene encouraged us all to make use of our vote, which was hard fought for by brave women and to take every opportunity to march for women’s rights as the women before us have.

After lunch President Margaret ran through some photos of women of achievement – submitted by Clubs. The gallery was extremely varied and included Florence Nightingale, Jo Cox, Lady Constance Lytton and our Soroptimist Member Rose Simbo.

We held a panel discussion about the UN CSW – Chair Jenny Vince SI Oxford & District, Panelists : Wendi Momen MBE SI Bedford & District, representative of the Baha’i faith at CSW and Revd Canon Terrie Robinson Director of Women in Church and Society at the Anglican Communion. This was kicked off with short speeches by Terrie and Wendi of their CSW experiences and were followed by a question and answer session. Overall the view seems to be that it is worth having a presence at CSW in spite of the cost because it does make a difference to the lives of women all over the world. We also got a glimpse of just how complicated the machinations of the UN is and how difficult the process is in order to gain international agreement to effect change. The message to Soroptimists is that it is vital for us to submit our Programme Focus Reports because this is the ground up information that directs our representatives to focus on what is important and it is the evidence in the reports that allows us to maintain our consultative status at the UN. 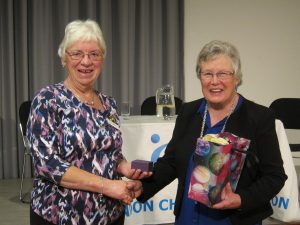 We wrapped up the day with a big THANKS to Margaret Badley for her year as Soroptimist International Region President (it officially ends at the SIGBI Conference in Liverpool 25-27 Oct). Region Secretary Rita Beaumont presented Margaret with a gift. Rita explained that next year the Region’s Executive Officers would run the year between them as a “Rainbow Year” sharing the responsibilities of Region President for 2018/19 between them.