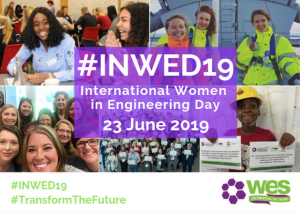 International Women in Engineering Day 23rd June 2019 – Why is this day important?

Women make up around 12% of the engineering sector in the UK. With a large skills gap looming and the need for a more diverse workforce, it has never been more important to inspire and encourage more people, especially women, to choose a career in engineering. International Women in Engineering Day (INWED) is an annual event developed and coordinated by the Women’s Engineering Society (WES) to celebrate the achievements of women in engineering and inspire younger generations. It takes place on and around 23 June – the date of the foundation of WES in 1919. To find out more about this see this link:

This international awareness day raises the profile of women in engineering, celebrates their success and focuses attention on the amazing career opportunities available to girls in this exciting industry.

The Women’s Engineering Society has these three aims – 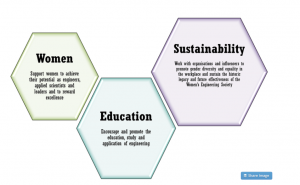 What’s it got to do with Soroptimists?

These aims chime with the Soroptimists’ commitment to to transform the lives of women and girls through education, empowerment and enabling them. They have long been concerned to open the doors to science, technology, engineering and maths for girls through a range of initiatives worldwide. Science underpins all engineering, and it is vital to encourage girls to develop an interest in science as a first step.

Closer to home, SI Nantwich and District established a hugely successful programme of events that took place in local primary and secondary schools every year during National Science Week over 15 years from 1995 to 2010. SETupSCIENCE was founded in 1995 by SI Nantwich and District and The Women’s Engineering Society under the auspices of the British Association for the Advancement of Science. I spoke to Dr Vi Pritchard, one of our members who chaired the committee.  She herself knows at first hand some of the barriers facing women following scientific careers – she was one of the country’s first women doctors, having benefitted from positive action to recruit only 6 female medical students at The London Hospital in 1948. By the time SETupSCIENCE was established, Vi was Community Paediatrician for South Cheshire. She describes the huge range of events that were set up in schools and visits to places of scientific interest – from an inflatable planetarium, a chemistry demo with bangs and flashes, exploration of Tudor Medicine, a visit to The Salt Museum, and a day of modelling to show how a Bentley is made were among the many activities organised for the young people. As well as introducing over 2,500 children, of whom over half were girls, to an exciting experience of science, Vi explains that this initiative really changed the way that science teachers approached the subject. In 2007, the project won the Soroptimists International award for Education. When it came to an end in 2010 Vi explained that they had achieved their aims, and that schools were more aware of the importance of science and were providing excellent science programmes themselves.

A great example of how a local school is taking action to support girls into science and engineering is at Leighton Primary Academy in Crewe. We heard their principal, Jo Young, speak at our 70th Anniversary Conference, and following this I had a chat with Jo Hall, the school’s Design Technology teacher, about the project they have with local luxury car manufacturer Bentley Motors. First of all she explains that being a female science lead in itself has encouraged more girls to develop an interest in science generally, as she is a positive role model for them. This particular project centres around the children stripping down, designing and building electric racing cars.

The children then go on to race their cars in national competitions. They now have two cars – this year, one is based on the Bentley, as it celebrates 100 years, and the other has a flamingo theme! They have a habit of winning too – 4 boys and 6 girls formed the team in Stafford the other week and were overall champions![/vc_column_text][/vc_column][/vc_row]

In 2017, 4 girls from year 5 took part in a national schools race competition as part of the Bloodhound project to develop the fastest car in the world and reached the finals, beating the RAF team and pupils much older then themselves! Jo is thrilled with the school’s success, but more than anything else, she aims to embed science into the curriculum with opportunities to apply what is learned. She is very proud of a former pupil now doing her GCSEs who has an ambition to study engineering and become a Formula One engineer – we would like more girls to have this kind of aspiration she says, but most of all “We aim to make learning real and unforgettable”

It is inspiring to hear about this local initiative to support girls experience engineering, these young women are surely going to transform the future!