As part of the celebration of the first centenary of Soroptimist International in 2021, more than 100 Soroptimists have been selected to be commemorated as part of the #WhoIsShe? Campaign. The centenary of the organisation seemed a fitting opportunity to recognise and celebrate the professional and personal commitments made by these outstanding members in the furtherance of the aims and objects of the organisation.

One of these women is Dr Violet Gladys Pritchard who has been a member of Nantwich Club for 45 years. Born 25th November 1928, Sutton, Surrey. Violet attended Wallington County High School for Girls, Surrey, from September 1939 as World War 2 began. She matriculated in June 1944 and hoped to take her Higher Schools Certificate. She studied at London Polytechnic for a BSc to gain a place in medical school. The London Hospital offered her a place in October 1948. She graduated in 1953, completed several house jobs, worked in general practice and then decided to specialise in paediatrics at Alder Hey Hospital, Liverpool. She obtained her Diploma in Child Health there, worked in the School Health Service in Liverpool, and spent eight years in Anglesey as Senior Clinical Medical Officer in Child Health. She moved to Cheshire in 1978 and 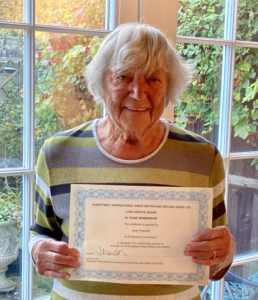 managed the School Health and Child Health Services, working closely with the Education Department, especially with children with special needs, and with Social Services for Child Protection and Fostering and Adoption issues. She was committed to children’s welfare, enjoyed a stimulating and rewarding career and retired in 1993. Dr Pritchard worked closely with the NSPCC and formed a fundraising District Committee. In 1981 she set up and became Chair of a support group for the founding of St Luke’s Hospice, which opened in 1988, and she was made Vice President in 2000. She was a primary school governor and Chair of Governors for five years.

“Dr Vi” as she is known in the Nantwich Club is an enthusiastic member of Soroptimist International. She joined the Anglesey club in 1974 and transferred to Nantwich in 1978. She was Nantwich Club President twice and Regional President of Cheshire, North Wales and Wirral in 1985-1986 and Regional Programme Officer 1986-1987. Dr Pritchard led a very successful project, SET Up Science (SET standing for Science, Engineering and Technology). This project was the result of a unique idea to encourage children and students to look to science in an interesting and fun way. SET Up Science provided a 10 day experience for young people and ran in conjunction with the British Association for the Advancement of Science. It provided lectures and visits free to a vast number of primary, secondary and high school children. In one year 4,750 children from 53 schools in Crewe, Nantwich, Middlewich and Sandbach participated. It was funded by business donations and grants. This project ran for 15 years and received a Soroptimist International of Great Britain and Ireland Best Practice Award.

Despite her 92 years Dr Vi still attends all meetings and keenly takes part in most events. She certainly inspires action and transforms lives.