Not a pleasant morning for the Summer Solstice, windy with some rain here!

It occurred to me when I was thinking about this weekly message that, during the last thirteen weeks, I have learned more about what our 12 Clubs are doing than in the three Regional Council Meetings which we have every year.  It is an impressive display of innovation, imagination and inspiration for which the Northern England Region is rightly known throughout the Federation.

Well done to everyone!

As promised, I bring you the list of those Soroptimists who have been nominated for #Whoisshe? and whose names have been moved to the next level:

If there is anybody I have missed, I can only apologise, as I have not been informed of any others.

The last two SIGBI News Briefings have included a link to a video message from our Federation President Isobel with an appeal to support the funding of the proposed Soroptimist Statue at the National Memorial Arboretum.  I urge you to watch the video and learn about the history of the plot from 2001 and the plans for the statue’s commission.

I have news this week from Dorothy Thomson, of SI Darlington [and former Regional President], telling me how she has been spending her time during Lockdown. Dorothy is now returned to her work as an Audiologist and describes the challenge of dealing with strict protoc 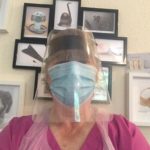 ols for face to face patient contact. She has allowed me to share a photograph  of her wearing PPE and admits that she does look a little scary in it!. Her patients, though, are delighted that she is back.

Dorothy’s charity for her Club Presidential year was HOPE THROUGH EDUCATION – a school in Karachi to which SI Darlington recently sent a £1000 donation. This was gratefully received as they were down to their last rupee – literally – and not sure how they would have survived as the school is in one of the poorest areas of Karachi and they have struggled to make ends meet during Lockdown. To raise more funds Dorothy has used her time to m 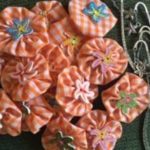 President Louise gave me a comprehensive update of what is being done in SI Tynemouth, Whitley Bay & District – I think Louise can never sleep! She introduced me to Karen Lapworth, one of their members, a nurse in blue scrubs 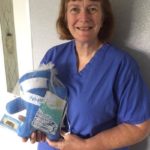 Karen went back to front line nursing at South Shields and the club is very proud of her and the work she is doing. Karen took the lead in the Club’s Toilet Twinning fundraising initiative. Karen received one of Anne’s knitted teddies from Louise. 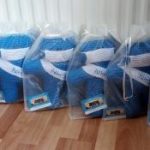 is close to knitting her 50th Teddy  which will raise £500 for the NHS and Anne is looking to use this money somehow to support nurses and their mental health needs in the future.

Tynemouth, Whitley Bay and District  members certainly know how to enjoy themselves and recently, Sue McSharry ran a Soroptimist Race Meeting Sweepstake on Zoom, with members wearing hats as it was close to Ladies Day at Ascot.   Apparently, Sue did the most amazing commentary and they raised £195 for charity with ‘ONLINE SHOPPING’ being declared the winner and ‘CUMMINGS AND GOINGS’ disqualified! 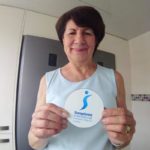 <<  Linda Johnson followed on from this by doing something similar with her neighbours and raised £160 to shop for their local Food Bank. Linda and Wynn Hetherington were awarded COASTERs – club awards for Socialites of the year.  Louise also awarded a COASTER to Louise Silverton for Social Media expertise. Better than a BAFTA or an OSCAR!

SI South Shields & district are continuing to be involved in supporting their local community. One of their members is a local GP who is also manning the NHS Helpline; another is a Trustee of a local charity founded in the 19th century which has made a grant to a child who has the very rare Batten’s Disease, to attend a succession of treatments at Great Ormond Street Hospital. To support the Custom’s House Theatre and Cinema charity, a member has purchased art works. [The artist happens to be the art teacher of several members].

Sue Percival & Jane Katsambis of SI Durham have delivered 12 Toilet Bags to Bishop Auckland Refuge and have a further 12 reserved for their next supply of New Start Bags.

I look forward to hearing from you to learn about your continuing work .

My quote this week comes from AA Milne and is recommended by Julie, a member of my own club:

‘Friendship’, said Christopher Robin, ‘is a very comforting thing to have!’

Don’t forget to COME DANCE WITH ME next Friday!

Until next week, Stay Safe and Keep Well