The first regional event I have attended since becoming Regional President was at my own club’s 84th Charter Tea on Saturday 13 November.  Whilst it would have been lovely to meet in person for lunch at our usual venue, The Centre for Life in Newcastle upon Tyne, we all had a most enjoyable afternoon.  It was wonderful to see a number of members from clubs in our Region as well as members from our Friendship Links, S.I.Glasgow City and S.I. Bangkok.  More about this event can be read later in the Newsle6er.

I’m sure you have all been following the discussions at the Climate Change Conference COP26, in Glasgow during the past 2 weeks.  However, you may be interested in the photograph below of a long “scarf” that was made by crafters (knitters, crocheters and 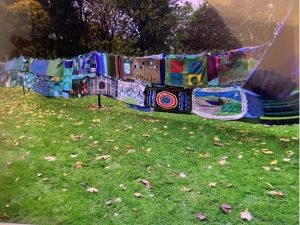 stitchers) from across the UK and even further afield from South Africa and Canada.  It was the idea of an Edinburgh woman and featured in the Glasgow Green during the Conference.  Each section includes a message about climate change and the environment, for the world leaders a6ending the Conference, to urge them to take action on climate change.   When stitched together the scarf was 1.5 MILES long which was significant as it reflected the Paris Agreement limiting global warming to 1.5C.

After the Conference some of the more artistic sections are to be kept for ongoing Craftism, art exhibitions and used to keep the conversation going.  The remainder of the scarf is to be made into small blankets and given to Charities for homeless people, refugees and asylum seekers or wherever good use can be made of the blankets.

There is a lovely ending to this story as a Soroptimist in our Region,  Catherine Waller of S.I. Newcastle upon Tyne, made one of the sections included in the scarf.  Her pale blue section is on the left of the photograph on the top line.  Catherine explained that she “chose the colour to represent our organisation and our beliefs in a better world for women and girls”.  She also supported the idea that some of the blankets would be given to children in need in some of the refugee centres throughout war torn environments.   By the time that you read this Newsletter I will have presented my first Regional Council Meeting which I hope those of you who were able to attend found interesting, particularly the speaker Huffty McHugh, of the West End Women and Girls Centre.  I look forward to seeing more of you at future meetings.

Take care and look after yourselves

S.I.Newcastle upon Tyne  enjoyed quite a party atmosphere on Saturday 13th November when they celebrated their 84th Charter Anniversary.  Like last year, the event was on Zoom but this had the advantage that, apart from our regional colleagues, we were also joined by members from our Friendship Link Clubs :  S.I. Glasgow City  and  S.I. Bangkok (where it was 11.0pm at night !). 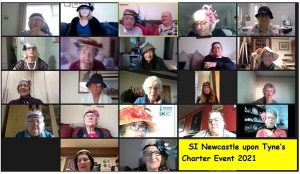 Following the Soroptimist Mission statement read by Joint Immediate Past Regional President Christine Lumsdon, the programme of events was delivered via a power-point presentation which had been prepared by our hard working Event Team.  Topics included: Highlights of 1921, scenes from our Club History, Highlights of our Programme Action work, 100 Trees on Twitter,  Positives about COVID and How We Supported our Members.  One highlight was an interactive section about past Presidents – who knew that one was seriously into crossword puzzles? 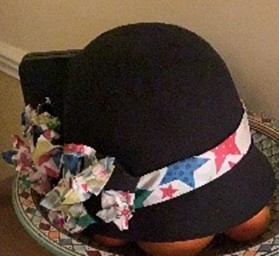 However, during the section entitled 2021,  S.I. Glasgow City’s Christine Findlay’s contribution on COP26 was particularly welcome as being insightful and personal.

A fun item was the judging of the 1920’s headwear by Joint Immediate Part Regional President Joyce Chesney.  The winning hat was worn by S.I.Newcastle’sLis Graham – as Joyce remarked –  it reminded her of a hat worn by her mother!  Our new Regional President Pam Turner then spoke saying how much she was looking forward to her year in office and her first Regional Council MeeOng.  She had enjoyed the afternoon and seeing people from other clubs. Our Secretary Cris’s poem aptly summed up the afternoon and led to the toasts with our final item being President Christine Tomkins closing remarks in which she warmly thanked everyone for coming and added that she didn’t need to wish us ‘safe journey home’ as we were already there. 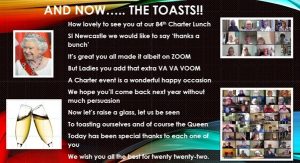 ORANGE THE WORLD   –  an invitation to all members in S.I. Northern England : 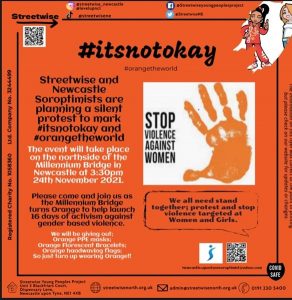 On WEDNESDAY 24th November  S.I.Newcastle upon Tyne  is working in partnership with “Streetwise”  to launch the 16 days of action on the Millennium Bridge on Newcastle’s quayside.   Everyone is asked to meet at the end of the Millennium Bridge on the Newcastle side at 3.30pm – where you will be provided with orange hi-vis jackets, orange face masks and orange flags.  At 4.30 pm prompt,  the Bridge will be lit in an Orange Glow and the procession will begin to cross the Bridge.   We have been asked to keep moving and not to obstruct the cycle lane – but it promises to be a memorable sight.   Do come and join us and show our support for all women and girls so they may always be safe in their environment.

S.I. Tynemouth, Whitley Bay & District  have sent this report from their speaker meeting in November : “Rie Pearson was the speaker at our November meeting.  She lives in Whitley Bay and came to our Club’s attention several months ago. Rie is a retired Police Officer who has written the book “Be Kind.  No Excuses”  which helps teenage girls recognise abusive behaviours in intimate relationships. The book consists of five true stories written by the victims themselves.  They are followed by notes which pull out a variety of behaviours to create a greater understanding of what to accept and what not to accept in a relationship.  In her talk, Rie told us about her experience in the police force, how the police have changed the way they deal with domestic violence over time and how the book came about. She also talked about how she would like to see her work develop especially in relation to working with teenage boys as well as girls.

A donation from each book sold is made to The Buddy Bag Foundation.  This is a charity which supports children taken into emergency care and the bags are very similar to the New Start Bags which many of th 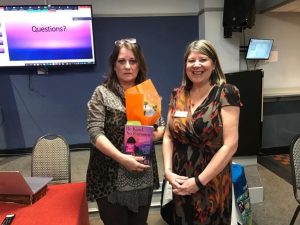 e clubs in our Region provide for women in dire circumstances.”

We all send our congratulations to Regional President Pam for her first and very successful Regional Council Meeting on Saturday 20 November.   She has continued to progress the changes we are making towards approaching the new ‘norm’ in regional meetings by having a speaker who reflected her theme of ‘Exceptional Women’.   So not only did we finish all the business within the hour, but we were able to listen to a wonderfully illustrated presentation from Huffty McHugh who is the Coordinator of the West End Women and Girls Centre  which celebrates its 40th Anniversary this year and truly demonstrated how dynamic community action can be.   Huffty described their current projects and told us of their celebrations which will be launched on International Women’s’ Day on 8th March 2022 – delayed due to the impact of COVID.

I know that contact details will be sent round the clubs but here are the basics :

Finally,  just to remind you to continue to send me reports and news from clubs and members.    I plan to have one more edition on Sunday 5th December before we take a break over the festive holidays and resume on Sunday 2nd January 2022. Please may I remind you that I am happy to receive your reports as text in an attached document or within an email  but that any photographs should come to me as separate  jpegs   please.