The inaugural meeting of SI Slough & District as it was originally known was held on 21st September 1961.  The club was chartered by SIGBI Federation President during October 1961 and subsequently the club has generally celebrated its chartering with a dinner at the end of the March of each year.  Latterly this has become a lunch and is generally held over the first weekend in April.

SIGBI President  Maureen Maguire flew  in from Nairobi for the weekend.

There was a Reception on Friday evening in St Mary’s Church Slough at 7pm with some bubbly and canapes to celebrate and a short recital on the piano by James Church.

Saturday was  centred around Windsor with opportunities to visit Windsor Castle or take a Bus Tour, walk around the historic cobbled area adjacent to the castle, visit Eton and Windsor Castle and, of course, enjoy the shopping in the renowned Royal Station Centre.  A light lunch was provided in Windsor Parish Church. 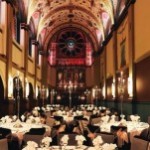 A special banquet took place at The White House, Beaumont Estate, Old Windsor during the evening of Saturday 24th March.  The Mayor of the Royal Borough of Windsor & Maidenhead attended and the President of SIGBI was the key note speaker.

On Sunday the focus moved nearer to the river Thames with Brunch on Queen’s Eyot near to Bray. 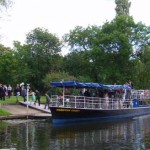 A short boat trip takes visitors across to the island.  There were displays of the club’s work and history and the opportunity for a more informal meal and chance to meet and mingle.  Later in the afternoon some members  visited the beautiful gardens of Cliveden or the Stanley Spencer Art Gallery in Cookham.

Finally there was an informal supper at a member’s home in Windsor.

Visitors came from Soroptimist Clubs in Switzerland, Belgium Lithuania, the Netherlands, Turkey and Northern Ireland as well as other parts of England so there was definitely an international buzz around this event which coincided with beautiful warm weather.