Our club has worked with DASH for many years in various ways including undertaking gardening at one of the Refuges.  In recent years the club has put together a Christmas Stocking containing toiletries and a voucher for each resident.  This year this has grown into a Christmas Bag of goodies which will be provided to each of the  15 residents.  Donations have also been made to DASH.     https://thedashcharity.org.uk/

SHOC is another charity which the club has supported over the years.  Each Christmas a special effort is made to collect together appropriate items for those that use the Centre.  A large collection of socks, razors and clothes are on their way to SHOC.  https://sloughhomeless.org.uk/

The club have agreed to fund two Video Doorbells for this local charity.  The Finchampstead-based organisation was founded by Vickie Robertson, who herself is a survivor of child and adult domestic abuse.   Kaleidoscopic UK currently holds two support groups in Wokingham and plans to grow to include additional groups for children, as they are often the forgotten survivors.

The club decided to invest with Lend with Care last year which is proving very rewarding.  Currently 73 family members and 24 entrepreneurs have been helped and 13 jobs created.  Some of those that have been helped are:

Jessica Isabel Quinchuqui Castañeda is 27 years old, single and from the San Miguel de Moraspungo community, from the Otavalo Canton, Imbabura province. Jessica is a seamstress, she has been making T-shirts for 4 years. Together with the help of a relative, they make a good number of T- shirts in a day and sell them to local merchants. Her income is US $600 (£461.46) which allows her to cover the household expenses.

Carmen Sofía Chávez Panamá is a native from Atuntaqui. The 39-year-old woman is married and mother of a 16-year-old boy and a 12-year-old girl. For the past five years Carmen has been sewing garments along with her husband. They deliver the finished and final product to larger textile companies. The joint income they receive through their work pays for their family expenses.

Carmen Sofía and her husband sew sports and casual clothing for children and adults. She knows that the Christmas season is an opportunity to sell clothes, so she plans to increase sales by 50% of normal.

Silvia is 47 years old; she is married to Javier who is 53 years old. Her husband Javier is a mine worker in the town of Sayapullo. They have 2 adult children already independent. Silvia and her family lives in their home that was made of rustic material, located in the district of La Esperanza, province of Trujillo, department of La Libertad, in the northern part of Peru.

Silvia Emerita Varas Gurrionero has been running a large grocery store for 10 years. She sells all sorts of household items which includes gas balloons, beauty products etc. Her main customers are her mainly from in and around her neighbourhood. Her grocery and household products sales are around S/1,400 soles (£301) per day, with a profit margin of 30% of the total value. Her beauty products sale are S/1200 soles (£258) per month with a profit margin of 40% of the value of the sale. Silvia continues to plan to further expand her grocery business, so that she can sell a greater variety of products.

Silvia and her husband suffered the effects of the COVID-19 disease thanks to natural medicine they both have recovered. Now she is taking the precautions of the health and strictly follows the rules. She looks healthy and desires to continue working.

She thanks Lendwithcare for the support that is provided during the difficult times that she went through. Silvia invested her previous two loans in buying gas balloons, noodles, sugar, rice and beauty products such as: makeup, perfumes and creams, etc. The loan investments helped her to offer a greater variety of products to her customers and she had greater income through her business.

Silvia applied for her third loan so that she can continue to grow as a micro-entrepreneur. She will invest the loan money to buy bags of rice, sugar, bottles of oil and other products from the wholesales market. Silvia wants to continue running her business in order to serve her neighbours and the general public who visits her store regularly to buy the products they need for their home.   /https://lendwithcare.org/

Like a number of Soroptimist Clubs, various members had been volunteers at Child Contact Centres over the years.  These centres were started to cope with the number of parents who were unable to have contact with their children after separation from their partner.  Usually the problem was that there was nowhere suitable for fathers in particular to take their children but increasingly the issue was related to lack of trust between ex-partners and concerns over abduction of the children.

However some 16 years ago it was realised that there was a great need for a facility in the Slough area.  Although there was a Child Contact Centre nearby in Maidenhead it was generally full with waiting lists.  The club members agreed that it would be a good project to undertake as there was definitely a need and many members were happy to become volunteers and could do this as they would be needed on a Saturday and not a working day.  It was felt that the project would have educational elements and would also link to health and issues regarding violence.

Two club members looked for suitable premises, ideally with two separate entrances, a large room for the non-resident parent and children with room to play, a waiting room for the resident parent and car parking.  Affordability was also a factor.  Ultimately St Andrew’s Shared Church in Cippenham on the outskirts of Slough was identified and agreed.  The church has a garden which is particularly enjoyed by families in the summer months.  A budget was put together and then accreditation from the National Association of Child Contact Centres in Nottingham was sought.  This entailed considerable paperwork which has grown over the years as each centre has to be reaccredited every three years.  Currently there are twelve policies in place covering everything from Health and Safety to Whistleblowing.  Volunteers had to be DBS checked and trained; initially training was fairly straightforward but now there are ten different modules which have to be covered every three years.  A schedule was drawn up to ensure that there would be a Co-ordinator and six volunteers available   for each two hour session.  Toys were acquired.  A website was set up, a mobile phone purchased and a leaflet produced.  Finally we were able to start in 2002.  The centre is open on the first and third Saturdays of each month from 1pm to 3pm.  Volunteers arrive at noon in order to prepare the rooms and need  to tidy up at the end of each session.  Initially all families were referred by solicitors via the Court service or by Social Services however this was later adapted to allow families to self-refer as many cannot afford the services of professionals.  . 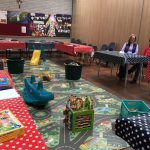 The service is provided free of charge to the families though donations are welcomed.  Generally a grant is made available to the Centre via CAFCASS (Children and Family Court Advisory and Support Service)  but this is not guaranteed so the club has to ensure that it raises enough money to keep the Centre going.  There is a Management Committee with a Chairman which meets four times a year to ensure smooth running.  On a day to day basis one member acts as the Administrator of the Centre which entails receiving enquiries via telephone, post or email from non-resident parents or solicitors or various other professionals.   Some of these calls can be quite harrowing when a parent is being prevented from seeing their child.  Cases vary hugely as do nationalities; Slough is a very diverse area and it sometimes sounds like the United Nations on a busy day.  In general there can be up to twelve families with maybe up to fourteen children on the Register.  However, illness and  holidays mean that it is rare for that many to arrive and seven to eight families is more normal.  Sometimes grandparents seek contact and surprisingly often fathers who have never seen their child use the service.  The reasons why the Contact Centre are needed are varied but sadly many cases involve substance abuse or violence so it can be quite a  learning  experience for the volunteers as well.

In 2012 the Slough Child Contact Centre in association with two other local Centres became the very proud recipients of the Queen’s Award for Voluntary Service which was felt to be a considerable accolade.  The sponsors for the award were a High Court Judge and our local MP, now Prime Minister, Theresa May.  Her letter of support spoke of the important work undertaken by the volunteers for the benefit of families in the community.   Fifteen years on, the Centre has opened on time for every session except one when the snow intervened.  Club members feel they give service to the community in a very real sense.   We estimate that we provide at least 750 hours of service each year.

21st July 2018 will be the date when the Child Contact Centre closes.  Difficulties in finding volunteers to undertake co-ordinator and administrator duties combined with additional backroom tasks such as dealing with the extended requirements of the data protection act have made this decision necessary.  The club feels that it has given good service to the community for fifteen years and is very sad that it has proved so difficult to continue.

Talking Newspapers for the Blind

Club members act as editors and readers for each of the following Talking Newspapers for the Blind on a regular basis; the USB sticks  are created from the news in the local newspapers and are sent out to some 70 or so recipients in each of the areas.  The service creates a lifeline to the blind and partially sighted.  Covid has made compiling the newspapers difficult because of social distancing requirements but a basic news service is being provided.