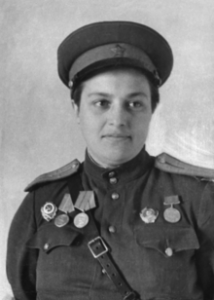 In lieu of presenting at our speaker meeting in May, Paul Strong has shared with us the chapter he wrote for a book on Women in War.  It describes the ‘Night Witches’ and Soviet snipers he would have mentioned in his talk to the club.  Here are some extracts from his chapter, and a picture of Lyudmila Pavlichenko, the most successful female sniper in history.

The ‘night witches’ was the German nickname for a Russian female flying unit, formed in June 1942 by Colonel Marina Raskova as the 588th Night Bomber Regiment, and re-designated in February 1943 as the 46th Taman Guards Night Bomber Regiment.  The ‘night witches’ flew night harassment missions, often making their final approach with the engines in idle to ensure surprise.  Their main task was to damage or disrupt key German installations.  The Germans soon learned to respect these women and acknowledged that they degraded the army and the Luftwaffe’s capability to operate by striking at bases and airfields.

One of the roles where women excelled was as snipers; 2,000 are recorded as being trained in this capacity during the war of which 500 survived.  The Germans found the use of women in this role bewildering, calling them musket-women (flintenweiber), and occasionally using pictures of the corpses of the snipers they killed, and identified as women, as proof of both the desperation and barbarism of the Soviet regime.  Amongst the most notable practitioners of the sniper’s art was Lyudmila Pavlichenko, who killed over 300 Germans (including 36 enemy snipers) in one year from June 1941, placing her in the elite of her chosen profession.  Pavlichenko was made a Heroine of the Soviet Union and promoted to major.