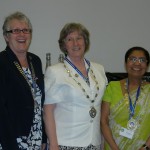 President Sharon Greenhow from North West England and Isle of Man, hosted this year’s Joint Reginal Conference together with our own President Dr Sriya Kulupana and Federation President Jackie Mosedale was a very welcome VIP.

The Theme of the Conference which was held at The Daresbury Park Hotel was “Victory over Adversity” and the Conference opened with a Sri Lankan lamp lighting ceremony on the Saturday morning, which was followed by an inspiriational address by Federation President Jackie Mosedale.

During the day Judge Bernstein told of her childhood in Vienna prior to 1939 and her subsequent escape to Britain from the Nazi regime. Anushya Kulupana, President Sriya’s daughter, spoke of her work with TARA (Trafficking Awareness Raising Alliance) in Glasgow, follwed by Eleanor Maddocks who went from being a victim of domestic abuse to running a women’s refuge. The final speaker of the day bein Carolyn Wolstenholme who work with the charity “Friends of Chernobyl’s Children”.

On Saturday Evening, a Gala Dinner was held with everyone in their finery, with many chosing the optional extra of wearing a Sari. A prize was given the to the best sari wearer after a fashion parade.

On Sunday morning Dr Alex McMinn gave and entertaining talk on the well being in later life, followed by Programme Action Presentations from both regions.
At the close of the conference Sriya gave a prctical demonstration of Mindfulness techinque that can help ease the stresses odf modern life.