A sudden downpour of rain? It by no means dampened enthusiasm on bowls finals day for South Lancashire’s Soroptimists. 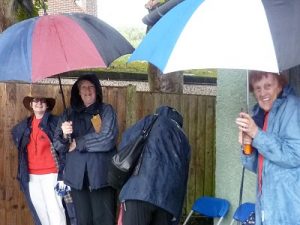 With the team trophy already won by SI Leigh & District, there was keen competition for the individual prize.

Nineteen bowlers from clubs in Southport, Liverpool, Leigh and Crosby took part in a knockout tournament.

Watched by a crowd of spectators from South Lancashire’s clubs, matches were exciting – nail-biting, even – but always friendly. Laughter often rang around the green, out-voiced only by frequent cries of “measure!” whenever vital points needed to be verified by the tape-wielders.

The three-way final took place between Dorothy Bowker (SI Leigh & District), Sandy Taylor and Yvonne Atkinson (both SI Crosby). It was a tense and well-contested match, with Yvonne eventually winning by just one point. 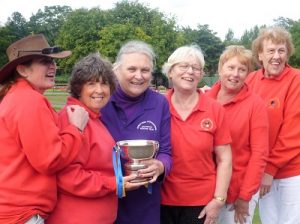 Margaret Davies, Regional President, was on hand to present the trophies. To SI Leigh & District’s team she offered many congratulations for their third success in a row.

This hat-trick should make for enthusiastic competition from Soroptimist teams next season.

The individual trophy is named for Tricia Fahey – founder of the Region’s bowls competition, and a former member of SI Crosby.

Presenting Yvonne with her prize President Margaret expressed delight that, in SI Crosby’s 80th year, the cup was “coming home”. 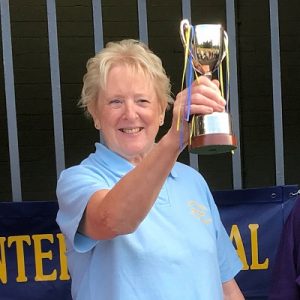