The #BreakingBarriers conference attracted 40 Soroptimists from South Lancashire Region. Delegates shared the day with members of the neighbouring region, SI North West England and Isle of Man, who had organised the event.

Speakers shared a variety of circumstances in which they had ‘broken through’ barriers, whether of gender, roles, ability or culture.

Dr Erinma Bell from Manchester spoke forcefully about the challenge of ‘peace activism’; how she worked for many years to address gun crime in South Manchester; and how she is now furthering community partnerships in order to tackle inequalities. Her tales of feisty dealings with politicians were fascinating.

Community activism is also the focus of White Ribbon (UK). Its founder, Chris Green, challenges his fellow men to face up to the role that men play domestic violence. “We need to reach out to men and lead by example”, he says.

‘Leading the way’ is certainly an aim of the Bolton-based community group Breaking Barriers NW. Steph Sherratt, one of the founders, spoke of the challenges and opportunities when supporting families with disabled children. Starting from her own experience of raising an autistic child, she took delegates on an emotional rollercoaster.

Emotion was to the fore when Flowa Houldsworth described her work with Médecins Sans Frontières (MSF). This medical humanitarian organisation is dedicated to saving lives and easing the suffering of people in crisis. It is impartial, independent and neutral. Its medical staff work in volatile environments. Within the restraints of local culture MSF staff develop ingenious strategies in order to treat their patients.

The women footballers of Dick, Kerr Ladies FC flourished at a time when cultural restraints severely limited women’s access to sport. Former in 1917 at a munitions factory in Preston, the team became a formidable sporting force to be reckoned with. Gail Newsham, historian and author of ‘In a league of their own’, gave a spirited account of the team and the barriers that officialdom erected to thwart their success.

Gender-based barriers were the first that Rosie Dummer faced in the Army Air Corps. She succeeded in becoming the first women to pilot a Lynx anti-tank helicopter. Subsequently her challenges have taken a new form as she developed her skills in baking. As an ‘extreme cake-maker’, she has tackled massive constructions, not least a 7-foot (in his bearskin) guardsman.

It was a full and fascinating conference programme; plus this was an excellent opportunity to network with fellow Soroptimists. 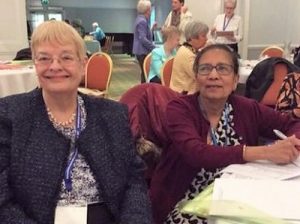