HM The Queen created the awards in 2002 in celebration of her Golden Jubilee with the purpose of recognizing excellence in voluntary activities carried out by community groups.  It is the equivalent of an MBE for volunteer groups.

The notification of the Award stated that:

“The work your group does for the community was very much admired by the independent Assessment Committee, chaired by Sir Martyn Lewis CBE and I am delighted to inform you that your group has been selected as a recipient for The Queen’s Award for Voluntary Service (QAVS) 2018.

“The award of The Queen’s Award for Voluntary Service 2018 represents a tremendous achievement for your organisation. We hope that everyone involved, and particularly your volunteers, feel immensely proud of the recognition that this Award represents.”

The award was announced in The London Gazette on 2nd June 2018 as a result of which the Club received an invitation to attend the Royal Garden Party – at which the Club was represented by Shirley Thompson, President at the time of the nomination and Bobbie White, then Immediate Past-President and stalwart leader of the STEM Challenge from its inception.

SI Bournemouth is most grateful to The Lord Lieutenant of Dorset, Angus Campbell, to Ian Jones, Head of Regional Community Partnerships, Office of the Vice-Chancellor at Bournemouth University for the nomination for this award and to Andrew Tate, Head of In-Service Support, RNLI and Angharad Holloway, Head at Talbot Heath School for their support of the nomination for this award.

The Club will also receive:

It is a fitting recognition of our STEM Challenge but also the culmination of 80 years of voluntary service by SI Bournemouth.

Tracey Crouch, Minister for Sport and Civil Society, commenting on the awards said, “Everyone who has received this award should be incredibly proud. Their service, commitment and care has a profoundly positive impact on communities throughout the country and I am delighted they have been recognised with this prestigious award.”

The Queen’s Award for Voluntary Service Independent Committee Chair, former broadcast journalist Sir Martyn Lewis commented, “This year’s record number of Queen’s Award awardees are a powerful testimony to the remarkable achievements and innovative ideas which characterise volunteering in the UK. They prove that, more than ever, volunteers beavering away at grassroots level are the active lifeblood of our communities, identifying all kinds of problems and issues and tackling them with enthusiasm, talent and a high degree of success.” 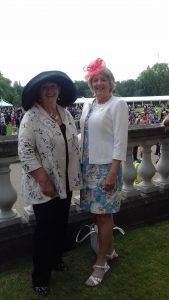 Bobbie and Shirley at the Buckingham Palace Garden Party