#WHOISSHE – a Tribute to Soroptimist Pioneers in Southern England region

It is fitting that we should also recognize and pay tribute to those pioneers who uphold Soroptimist International values throughout Southern England region now and in the past……..

Despite physical disabilities suffered since polio at six years old which confined her to a wheelchair, Rosalinda Hardiman enjoyed a successful career as a museum curator in the City of Portsmouth.

Rosalinda is passionate about her hobby of swimming, so much so that it  led her to become a triumphant member of the British Paralympian team in 1996 and 2000 going on to break eight world swimming records.

In 2008 and 2009 she succeeded in swimming the English Channel and as if this wasn’t enough of a challenge she then swam the length of Loch Ness in 2019! The latter fulfilled a childhood dream having holidayed there several times with her family.

Those who have met Rosalinda will already know that she is a formidable woman with incredible determination, a passionate and active member of SI Solent East, and since retiring has experienced the world of U3A.  Her involvement in the latter prompted the local U3A members at Waterlooville club to share knowledge of her achievements which led to her featuring recently in the national magazine, ‘U3A Matters.’ Another proud moment for a woman who continues to reach the ‘glass ceiling’ from her wheelchair! 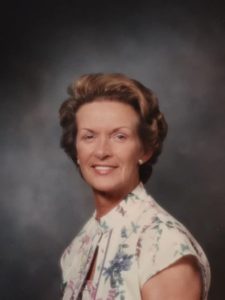 Pat Sloman, affectionately known as the ‘Duchess of Dorchester’, joined SI Bournemouth in 1965. In 1970, Pat transferred to SI Poole and remained a member until her death in 2004, aged 77. She was Club President from April 1975-76.

Pat also filled a role higher in Soroptimism, being the International Programme Co-ordinator from 1983-87. This work included a visit to Senegal to make a film about the lack of water. Pat championed the cause of the Senegalese people, and the film raised a considerable sum of money for UNICEF.

Pat was a journalist and then a TV presenter – the first female news presenter on BBC South. She worked as women’s page editor on the Bournemouth Echo in 1965 before going into television, eventually becoming a familiar face on Home At 4.30 and Day by Day.

Pat was a strong and dynamic person. She held a number of roles including that of public affairs director for Dorset. Later, she would become a trustee with Poole Arts Centre and was on the executive board of UNICEF UK.

Margaret said that joining Soroptimist International was the best thing she had done in her life. She overcame personal challenges and in many respects the organisation was her family. She certainly embraced Soroptimism, whole heartedly.

She joined SI Cheltenham in 1980, moving to SI Portsmouth in 1982 and then SI Winchester in 2001. She twice served as President of SI Portsmouth 1985-6, 1999-2000 and as President of SI Winchester 2006-7. She served as Southern England Regional President 1991-1992. At Federation level, Margaret was Co-ordinator for Economic and Social Development on the UK Programme Action Committee. Throughout there was a plethora of sub-groups, committees and campaigns upon which she targeted her energies. Margaret’s professional role was Manager of Mediation Services, which required much hard work garnering funding for this essential service.

Margaret was kind, a great listener, determined and stubborn; qualities which made her an excellent Soroptomist. Notably, Margaret was a keen supporter of the BIG (Birthing in the Gambia) Project, driving  SI Winchester’s confidence in its ability to raise £10,000 to purchase a Scanner. Ultimately, the Scanner was installed in honour of Margaret. In the latter days of her cancer she continued to travel from Southsea to Winchester to contribute to meetings even though she could no longer drive.

Margaret had many interests. She was a consummate fan of trains and old buses and together with a friend was working to get a vintage car restored.

Margaret’s death was untimely because she was at the height of her contribution to many things and so many people. Reference to her energy still permeates the Winchester club.

The BIG Project: Working with MCAI, SIGBI’s BIG Project aimed to improve the management of emergencies during pregnancy, childbirth, infancy and childhood in The Gambia. 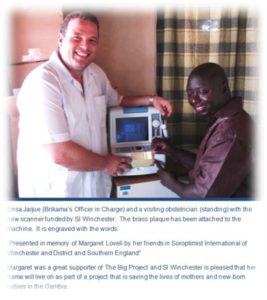 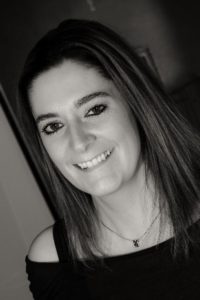 Club members first met Michelle when she came to speak to us about domestic abuse/violence as a worker for East Surrey Domestic Violence Forum.  Her talk had a lasting impact.

East Surrey Domestic Violence Forum became East Surrey Domestic Abuse Services when it was set up as a charity in 2002 taking Michelle as part of the package.  She has worked tirelessly for this cause becoming Chief Executive Officer in 2014.  Under her leadership ESDAS has grown and expanded to become a hugely respected leader in the field.

A talk from the Chief Constable of Surrey at a recent Annual General Meeting was tribute to the respect in which the work of ESDAS and Michelle herself is held, and the positive working relationship they have with the local police.  Similarly, the attendance of so many representatives from statutory and voluntary organisations at the AGM each year shows the strength of links and partnerships forged with all local organisations touched by domestic abuse.

The club has supported Michelle and ESDAS since 2003.  We were so delighted when Michelle was awarded the MBE in 2018, a fitting tribute to her leadership and work over two decades.  She spoke to club members most recently in November 2020 to give us a view of problems during the pandemic. 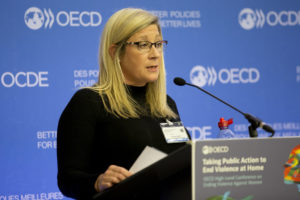 Charlotte is a survivor, with her children, of a horrendous abuse situation.  Turning her personal experience to good use, she campaigns for the rights of and services for abused women and their families.  For some years she has been the Chief Executive Officer of Reigate and Banstead Women’s Refuge. With her team she provides a haven for women and their children, and support and services to help them move back into the community to carry on with their lives.

Charlotte is a passionate speaker on the needs of abused women and their children, frequently to be seen and heard on television, radio and in the press, at meetings and conferences locally, nationally and internationally.  She has spoken about her personal experience to the Organisation for Economic Cooperation and Development, rightly receiving a standing ovation for her courage.

During lockdown, Charlotte succeeded in opening a second refuge and is developing this to provide more shelter and support for her clients.

Charlotte came to speak to the club in October 2019, since when we have developed  the relationship, in particular raising funds during lockdown. Charlotte has now accepted the club’s invitation to become an honorary member.