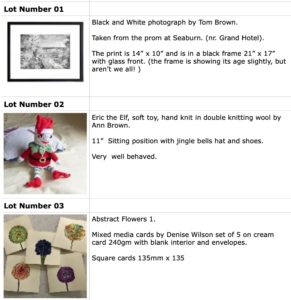 Over the last few months members, family and friends have been busy making articles to put up for auction such as handcrafted and painted cards, bird boxes, a bug hotel, framed watercolours, knitted and sewn items as well as promises for afternoon tea and a South African themed meal. Each item was photographed and put into the Auction catalogue which was distributed widely.

Auctioneer Ann Brown said: ‘In these strange times when we cant meet up together you have to think outside the box. This was a completely new venture for us and although well thought through, we weren’t sure it would actually work, but it did!’

The Auction which was held on Zoom on the 10th March went according to plan and £685 was raised for the Charity.