Members were keen to support this project and made donations of books which were  packed into a large cardboard box, they were pleased at such a neat job.  It later dawned that it was over the weight limit and no one could pick it up!

We shared out the books between four boxes ready for them to be collected by courier. The large box now had a large space so that had to be filled with polystyrene. There is a charge for each box so instead of an acceptable £7 for one, we were up to £28. There was a form to fill in online to make an appointment for the collection.  It was not possible to finish filling it in until a box flashing red was dealt with – a donation was required towards the shipping cost. I won’t list the problems with couriers but suffice to say the books were finally collected and they’re on their way. One of our members was happy to pay the bill. I have to say this project has left me with mixed feelings.

However, it is a great thought to realise that a book from someone in Torquay will arrive in the hands of a grateful person in Africa. 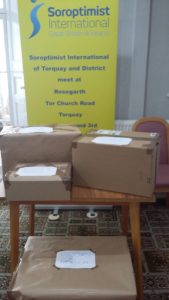