Soroptimist International of Trinidad and Tobago is part of a worldwide organisation of women, which is linked to the United Nations.

Welcome to SI Trinidad and Tobago

It was a glorious return to an in-person meeting since our last AGM in 2019. All clubs were represented—SI Anaparima, SI Chaguanas, SI Couva, SI Esperance, SI Newtown, SI Port of Spain, and SI San Fernando. Despite a bit of inclement weather, it was a great turnout of members. 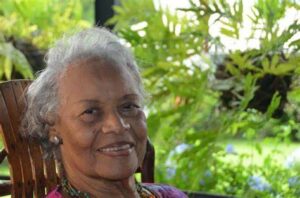 We have lost another distinguished Soroptimist,
Justice Monica Barnes SC who passed away on the
10th June, 2022.

She was a dedicated and longstanding Soroptimist member of SI Port of Spain Club and the first President of the former SI St. Augustine Club when it was chartered in 1985. Last year she was bestowed with “Honorary Membership” of the Soroptimist International National Association of Trinidad and Tobago for her invaluable contribution to Soroptimism.

The National Theatre Arts Company of which Justice Monica Barnes’s sister, Belinda, is the artistic director gave the following tribute:-

“An alumna of Bishop Anstey, Justice Monica Barnes was instrumental in the development and chartering of Soroptimist International St. Augustine, holding the position of charter President in 1985.

“Before becoming a sitting judge, Justice Monica Barnes, with the Soroptimist International, initiated the Golden Grove Women’s Prison project, preparing and empowering female prisoners for productive lives, on their release.”

She brought her grace, compassion, generosity and intelligence to bear in all areas of her life, profoundly elevating the lives of those she touched, both professionally and personally.

Her honourable legacy lives on and will never be forgotten.”

(extracted from the World News)

We extend our heartfelt condolences to her family, friends and sister Soroptimists. May she rest in peace.

To commemorate International Women’s Day 2022, each of the seven clubs of Trinidad and Tobago produced a video entitled:

A Mother’s work is REAL. Mothering through the Pandemic.

Club videos were posted, one each day, from March 1st, leading up to International Women’s Day on March 8th, 2022

Following are the videos:

Our Time Capsule commemorates one hundred years—1921 to 2021—of Soroptimist International internationally. It will be unearthed on December 29th, 2071, fifty years from now.

Soroptimist International National Association of Trinidad and Tobago held its 48th Annual General Meeting on Saturday, September 25th, 2021 at 2:00 p.m. via Zoom. Once we were done with the business at hand, we celebrated the 100th Birthday of Soroptimist International. We raised our glasses, toasted, and lit candles making wishes for a Brilliant Future for both the organization and for the lives of women and girls around the world.

In celebration of SI’s Centenary, on Sunday, July 25th, 2021, SITT published a 24-page newspaper supplement with the Guardian Newspaper, Trinidad.

SITT La Soufrière Relief 2021 to SI St Vincent and the Grenadines
In support of those displaced by the eruption of La Soufrière volcano in St. Vincent and the Grenadines, Soroptimist International Trinidad and Tobago—SI San Fernando, SI Newtown, SI Port of Spain, SI Chaguanas, SI Anaparima—provided assistance by way of goods sent directly to SI St. Vincent who are supporting the evacuees. April 2021.

February 2021
The following letter was written, and forwarded to all media houses in Trinidad and Tobago after the brutal murder of another young woman who was kidnapped in January 2021.
Her name was Andrea Bharatt. She was 22 years old.

It is no secret that our country is experiencing increasing levels of Gender-Based Violence (GBV). As a nation, we are traumatized by the brutal killing of yet another woman. This must end!

Soroptimist International of Trinidad & Tobago—
6 clubs of women whose mandate is to act in the interest of women and girls—add our collective voice to the many other cries of outrage at the continued increase in the level of crime and violence against women.

It cannot be “business as usual” if the women of Trinidad & Tobago are to live free from fear of violence in their own lives, and those of their daughters, granddaughters, mothers, grandmothers, sisters, aunties, cousins,
nieces and friends.

We call on each individual and every family unit to take some time for introspection. See how you may be part of the problem and how you will be part of the solution. We ask that our girls be brought up to expect and demand respect and full ownership of their bodies. We advocate for our boys to be raised to see women as equals, to understand consent, and to resist the objectification of our bodies. Stop catcalling women, unwelcome touches, degrading jokes,
and victim-blaming.

We call on religious bodies and communities to provide safe spaces and programs for our men to learn healthy behaviours. We call on our brothers to hold one another accountable and to be our allies as we stand up for women.

We call on our entertainers to consider the attitudes and behaviours your lyrics may be promoting, and choose not to contribute to women being viewed merely as objects of pleasure.

We call on our government to break the silence against GBV. We urge you to present a transparent plan with frequent updates to combat and win this war against the safety and security of the women of Trinidad and Tobago. We cry out for swift justice to perpetrators of violence against women. We look to you, our leaders, to drive the change from the top.

We know the solution to this problem goes beyond awareness, and so we commit to doing our part as we together work towards the reduction of gender-based violence in our country.

March 2021, will be one full year schools have been closed in Trinidad and Tobago due to this global pandemic—COVID-19. Our students continue to struggle with hardware/software and internet connectivity issues. SITT Executive members, Marissa, and Rachelle handed over the computers to the school’s principals and students.

A truly lovely afternoon, as the new SITT Executive met for the first time in person after being thoroughly Zoomed-out. Great food, great fun, great memories, great meeting. Of course, all Covid-19 protocols were observed.