It is also the founder Club of Soroptimist Clubs in the English – Speaking Caribbean.

Today marks the 63rd Anniversary of Soroptimist International of Port of Spain. The club was chartered on the 16th January 1959 and was the first in the English-speaking Caribbean.

This club is known for its rich history and indomitable pioneers whose legacy of dedicated service will always remain with us.

Hereunder we present highlights of the year in review.

Here’s to our hardworking and dedicated team members and prospects of SI Port of Spain on the 63rd Anniversary of the club.

Christmas hampers for the Gordon Home

SI Port of Spain members brought Christmas cheer to the Residents and the hard working Staff of the Gordon Home, Marli Street who were all pleasantly surprised and very appreciative of the lovely hampers received.

A “Covid comfort, a listening ear” initiative last year by members of SI Port of Spain with the Residents of the Gordon Home was well received and also greatly appreciated.

SIPOS representation at “Ours to Honour” Exhibition

Pat Adams, Programme Action Officer, represented SI Port Of Spain at the Women’s Institute for Alternative Development’s (WINAD) exhibition at the Rotunda, Parliament Building, which featured 16 women’s organisations. It was launched in observance of the 16 days of activism against violence of women and girls.

The Exhibition is titled, “Ours to Honour” and promises to be a foundation stone for enriching the country’s historical records as it focuses on pioneering and celebrating current and new criteria for leadership

The exhibition runs until December 10th.

SIPOS Members thoroughly enjoyed hosting of the 2021 Soroptimist International Friendship Day- “Aloha”.. A Hawaiian Experience.  Sincere appreciation was extended to all the SI clubs for their great participation and wonderful presentations. The creativity, hard work and great support displayed by all club members were evident throughout the event. The friendships made and  great camaraderie experienced would forever be cherished. 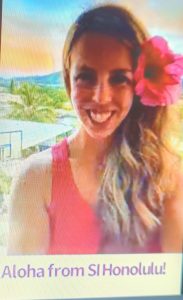 A special thank you note was extended to Lisa Broulik, President of SI Honolulu and members of her club, who took the time to send  Aloha greetings on our Friendship Day.

Soroptimist International, Port of Spain (SIPOS) won a Best Practice Award in the category of “People”

SIPOS was one of five Clubs in our Federation to be awarded at this year’s Conference. This was a proud moment for the club’s members on this achievement which was a result of hard work and commitment even during these unprecedented times!

Worthy of mention is that three of this year’s five awards have been won by Trinidadian Clubs!

SIPOS in addition to the Best Practice Award received recognition for their Membership Strategy at the SI Great Britain and Ireland (SIGBI) Conference on the 29th and 30th October 2021. 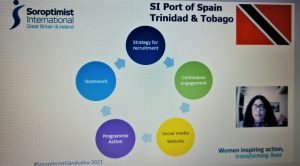 SIPOS’s presentation included inviting potential members to know about their Program Action, Team Work, Continuous Engagement and the extensive use of their social media platforms and website.

Congratulations also to their sister club,
SI San Fernando who were also selected for their Recruitment Strategy.

To mark the significant Soroptimist International centennial milestone, Soroptimist International of Port of Spain with the support of the Ministry of Agriculture, Land and Fisheries, embarked on an initiative to plant the Yellow Poui and the Silk Cotton trees on the eastern side of the Queens Park Savannah in support of the theme “Planting trees for a Brilliant Future”.

As part of our commitment to the environment and in celebration of the Soroptimist International centenary, we aim to do our part in restoring and protecting the environment, thus creating healthy ecosystems.

On Saturday 9th October 2021 we had the first face-to-face meet and greet and discussion sessions for the “Big/Little Sister” pairs of the Women’s Institute for Alternative Development (WINAD) /Soroptimist International, Port of Spain (SIPOS) Intergenerational Women’s Leadership program which was held at SIPOS’s premises at 15 Nepaul Street, St. James. Since the launch of the program in May of this year all the workshops have been virtual due to the Covid pandemic. 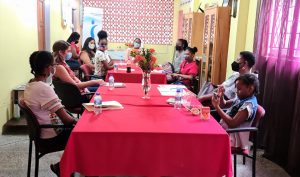 It was so good to have the “Big Sisters” meet their paired “Little Sisters” in person which was a great step in reinforcing the relationships. Brooke Hadeed, Director of programming at ( WINAD) did an excellent job in facilitating the sessions held throughout the day and there was great participation from all the girls. During the discussions on their respective projects which were all different and very insightful, it was clear that the girls have a better sense of the program and how it is meant to impact them- to raise awareness of something that needs attention in their communities and to be willing to do something towards making it better. 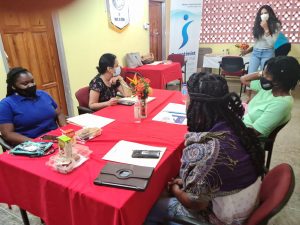 The program runs until March 2022 whereby there will be a graduation ceremony.

Awareness of the problem of human trafficking

As part of an initiative of Soroptimist International of the Caribbean Network, members of SI Esperance and SI POS placed a banner at the Tobago Terminal to create awareness of the problem of human trafficking and a phone number to call if suspicious of its occurrence. Banners with similar messages are being placed at ports of entry throughout the English speaking Caribbean.

The North West Regional Health Authority are partnering with various NGOs for volunteers to assist as “Care Ambassadors” providing customer service to the elderly population as they seek vaccination services at the designated Health Centres.

We thank Gayatri Dass who represented SIPOS today at the Diego Martin Health Centre. This involved her pleasantly greeting the elderly, engaging in delightful conversation to ensure that they were comfortable and assisting them in completing their forms. Gayatri said that her experience was indeed an enlightening one.

In celebration of SI’s Centenary, on Sunday, July 25, 2021, SITT published a 24-page newspaper supplement with the Guardian Newspaper, Trinidad.
Here’s our full-page editorial…

SI Centenary Tree Planting Project-
Planting of a Sapodilla Tree on the premises of SIPOS, at Nepaul Street, St. James. 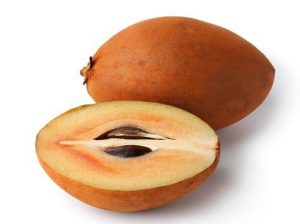 Sapodilla is a tropical evergreen tree well known for its delicious brown fruits and its numerous health benefits.

The tree is fast-growing and flourishes well even under dry arid regions receiving scanty rains. As we approach the dry season in Trinidad and Tobago (which usually commences in February and ends in May) we thought this an appropriate tree to plant.

The tree was planted on the grounds of Soroptimist International Port of Spain’s premises in St. James, Trinidad.

Botanically, sapodilla fruit is a round or oval-shaped berry, measures about 10 cm in diameter and weighs about 150 g. A tree can produce as many as 2,000 fruits/year.

There are great health benefits from the Sapodilla fruit including as an excellent source of antioxidants.

Women’s Institute for Alternative Development (WINAD) in collaboration with Soroptimist International Port of Spain (SIPOS) launched the Intergenerational Women’s Leadership Program on Saturday May 1st, 2021 via a virtual platform.

The heart of this Programme is the partnering of teenage girls with “Big Sisters” in workshops which are built on the pillars of human rights education; leadership and seeking ways to promote gender equality and security, free from violence.

The programme which will be for a duration of 1 year is designed to empower girls through leadership development, to foster lifetime skill sets and strategies of critical analysis and problem solving and to impact girls’ personal career trajectories. It provides tools to help girls understand and capitalize on their strengths, to make positive life choices, to achieve academic success, and overcoming the barriers of sexism.

From Then Til Now
This is a video presentation of the Pioneering Soroptimists throughout the years and the phenomenal groundwork done for uplifting the status of women in Trinidad and Tobago.

In commemoration of International Women’s Day 2021, all six Soroptimist International Clubs of Trinidad and Tobago united to produce a series of videos featuring prominent local women who choose to challenge gender bias and inequality.

These women hail from different backgrounds and each shared their journey and determination to forge a gender-equal world.

# I CHOOSE TO CHALLENGE THE STATUS QUO

SI Port of Spain is honoured to have interviewed Na-o-mi Frederick – 21 years old, CEO/Founder of Women of Steel, an organisation which empowers young women and showcases excellence in the steelpan industry and in steelpan manufacturing.

Na-o-mi is a brilliant, committed, motivated, passionate, enterprising young lady who has a vision to inspire young female pannist like herself to reach their true potential by introducing them to steelpan manufacturing. She CHOSE TO CHALLENGE THE STATUS QUO in breaking the glass ceiling in a male dominated industry. “Women of Steel” is a very insightful name as it not only denotes women pannist but it conveys sterling qualities of strength and power in women. This organisation is a powerhouse of young women making a positive difference. They have showcased several female pannists on their social media platform creating a medium for inspiration for pan players, arrangers, manufacturers and enthusiasts alike.

Early this year they created a scintillating video production called “Tribute to Women in Pan” which not only paid tribute to women’s presence in the steelpan industry but also gave an insight into steelpan manufacturing process and showcased unity among women in the steelband community. They plan to continue to create more video productions to highlight female excellence in the steelpan Industry. In 2022 they also plan to partner with Pan in School Coordinating Council to host workshops in Secondary Schools which will give students an insight into the history of the Steelpan industry, steelpan music, the discipline involved in becoming a professional pannist and the area of steelpan manufacturing.

16th January 2021 marks the 62nd Anniversary of Soroptimism in the English-speaking Caribbean. Being the first Club to be chartered in the region it is also Soroptimist International Port of Spain’s 62 Anniversary. It is a Club with a rich history, its founder President being none other than Audrey Layne Jeffers O.B.E. The Club’s Charter celebration took place at the Country Club and since it was before our Independence in 1962, a toast to the Queen was proposed by the then Attorney General, the Honourable Mr Ellis Clarke who later became His Excellency , The President of the Republic of Trinidad & Tobago. SI Port of Spain set the tone and the pace for Soroptimism in Trinidad & Tobago and were responsible for the formation of SI San Fernando in 1962.

Newspaper clipping below:
Dinner function to commemorate the presentation of the Charter to Soroptimist International, Port of Spain. Presentation was made to President Audrey Layne Jeffers. 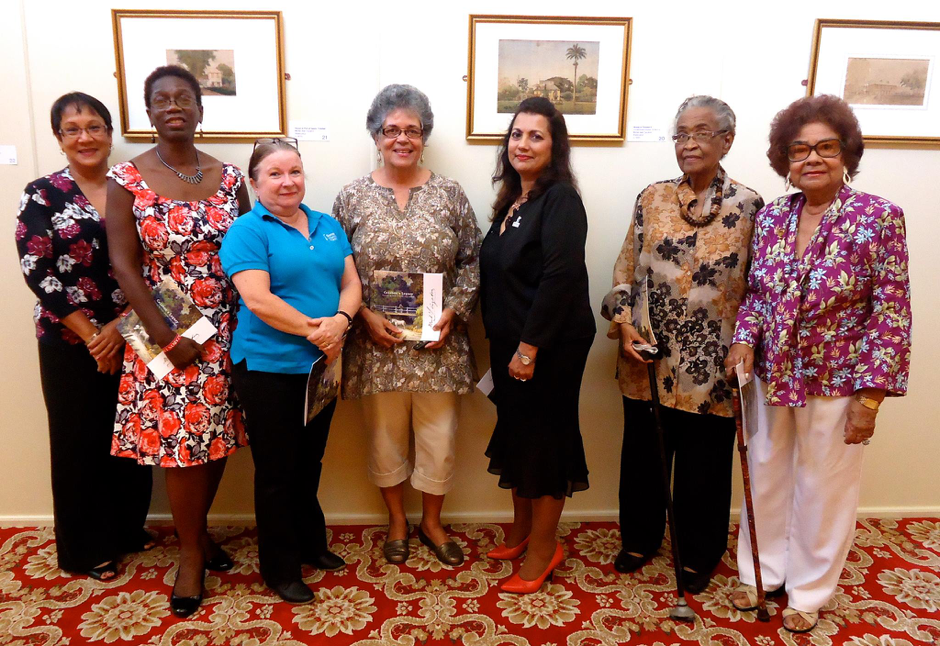 You are welcome to visit our Facebook page at:
https://www.facebook.com/Soroptimist-International-Port-of-Spain