On Thursday 20 November at the Holiday Inn, Winchester, local Soroptimist, international jewellery expert and published author Beatriz Chadour-Sampson spoke to us about her book: “Barbara Cartlidge and Electrum Gallery. A Passion for Jewellery” 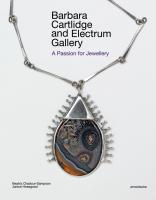 Beatriz says: “This is about the amazing personality Barbara Cartlidge who came from Berlin and lived most of her life in London. She was a strong woman, and her true story about escaping Nazi Germany is fascinating and very current.”

Following the meal, Beatriz told Barbara’s story of escape and her life as a Jewish refugee in Britain, and describe her achievements in the field of contemporary jewellery. Barbara only died this year, and in the end was suffering from Alzheimer’s disease so Beatriz was keen to make sure that the achievements of this remarkable woman did not go undocumented. Born in 1922 in Berlin, the youngest of four Feistman children, Barbara was christened Emma but adopted the name in preference to her given name. She escaped from Germany in 1938 to Copenhagen and later onward to England. She studied in London with ‘friendly alien’ status and even then showed signs of a remarkable artistic ability. She married Derrick Cartlidge in 1944 and they were both politically active in opposing the Vietnam war. She went on to design beautiful, groundbreaking pieces of jewellery and established the Electrum Gallery in London.

In the thirty-six years that Barbara Cartlidge ran the Electrum Gallery, over 1,000 artists exhibited in this pioneering site of international art jewellery. Her absolute passion for jewellery secured the success of this gallerist, author and jewellery artist. The first section of Beatriz’s book is dedicated to her biography and traces the Jewish girl born in 1922 in Berlin on her hazardous escape from Nazi Germany, her life as a war refugee and, finally, starting a family and founding the gallery in London. Part two introduces a representative selection of artists who have exhibited in the Electrum Gallery. Works that were first presented there can today be found in major museums across the globe. Memories of the vibrant jewellery scene and of the passionate gallerist Barbara Cartlidge are found alongside groundbreaking pieces by the artists.