We were delighted to have the Lady Mayor of Winchester, Cllr Eleanor Bell, at our supper meeting this week at the Holiday Inn Winchester. The speaker was Hollie Ryan from the National Trust property The Vyne and we had an excellent turnout with members from SI Southampton and friends and guests.

We were keen to know the Mayor’s charities for her year and how we might be able to help. We were also able to show her the projects in which SI Winchester club is involved. Her charities include the Firefighters Charity, Winchester First Responders, Winchester Hospice and the Children’s Society. We look forward to her making a return visit.

Hollie was an enthusiastic speaker and told us about the history of the property and how it had been a favourite of the young King Henry VIII and Anne Boleyn. He enjoyed the hunting and the hospitality, though it was a drain on the finances of the owner Lord Sandys. In particular she was keen to state how Lord Sandys himself, though a Catholic, had remained in Government and a friend of the King even after the breakaway from Rome and the Pope. The Oak Gallery and the Chapel are of particular interest. She enthused us all to make a visit. 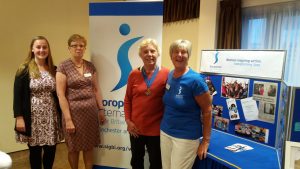