The club decided on a summer fundraising event to be held at the home of Barbara Jeremiah and Kay Linnell. The event was to be a Teddy Bears Picnic, with bears coming free with their owners. We were delighted to welcome members from SI Southampton as well as SIW club members and friends.

There was a good turn out and the weather on 13 July was just right. The picnic is always well catered for at Brick Kiln Cottage with the whole garden being used. We made a nominal charge and total for our charity fund reached about £300.

Myra Clare’s Teddy Bear won a prize for being the oldest bear and a passport for future travel as time progresses. Pooh Bear received a jar of honey and Barbara’s bear was the best dressed. In addition to the bears at the picnic, the resident peacock Percy was on hand to welcome everyone. 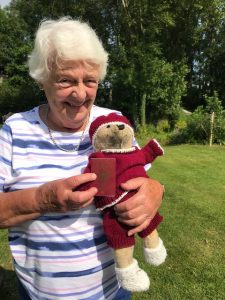 As an extra treat the teddy bears were allowed to travel in Gina’s Morgan and Barbara’s MG which were given special parking privileges. 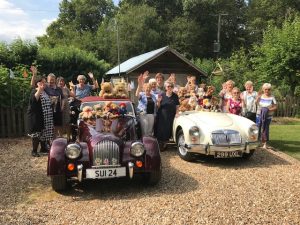