Then and Now – 100 years of Soroptimism

“I do not think I am being over optimistic when I predict that in a few years’ time there will be a Soroptimist Club in every town and city of importance in Europe and America” .  Mrs Pitt-Rivers said this in the first edition of ‘The London Soroptimist’ Newsletter in 1926. She was right!

The first UK Soroptimist Club published the ‘London Soroptimist’ magazine for the first time in September 1926.  It was followed by The British Soroptimist magazine, launched in 1930, and filled the need to circulate information, ideas and news to all members in the country.  Initially in black and white, the magazine evolved into a full-colour edition, called ‘Soroptimist News’ from 1991, and then ‘The Soroptimist’.  Today, the Soroptimist magazine is entirely electronic, easily downloadable with the app.  In every guise, it’s always read from cover to cover by members.

The Soroptimist movement went on growing rapidly during the 1930s.  Members saw opportunities to look beyond their local community. They could meet and cooperate with women in other clubs and at Soroptimists at international meetings – a source of interest and pleasure.  In the early years, there were ‘vocational parties at the Soroptimist Conventions. Members met their counterparts form other parts of the country and the world.

One of the benefits of membership of Soroptimist International today that Soroptimists across the world welcome any member visiting their area.

The Sister club plan was set up to make it easier for Soroptimists to reach out to clubs in other countries. They deepened the ties of friendship.  Soroptimists learned about each other. They were also able to help in an emergency and cooperate on joint projects.  The Sister Clubs were renamed Friendship Links in 1970, and the connections are better organised .

SI Woking members have many wonderful memories and souvenirs of such visits.   Some of us spent a memorable spa day in the original spa of the town of Spa in Belgium!  And among our souvenirs are this cookbook brought by a visitor from SI Gold Beach. The lovely pincushion reminds us of our visitor from Estonia. 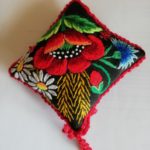 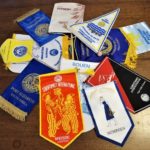 Finding friends is always important, but Soroptimist  International is about more than friendship.  In 1933 it was said that “The binding force of Soroptimism is service.  Without that, it is just a pleasant club.  With it, it becomes a band of women united for service, for truth and justice in every town and country where its influence has been felt.”  During the 1930s, Soroptimists  tackled social issues in their community: housing, youth, the elderly, crime, prisons.   The SI Club in Halifax, for example, helped to provide single-person flats throughout the decade and Si Sheffield offered a rest home..  Today, we still address those issues:  SI Woking has contributed for example to the York Road Project (homeless), the Women’s Support Centre and Send Family Link (prisons).

During the 1930s, women in the US and the UK could talk in terms of the improvements in their status.   In 1934, Mrs Mercy Ellen Crehan, of the America Federation, is reported to have said at the Paris Convention: “A hundred years ago women were known as females, fifty years ago, we were ladies, but now, thank God, we are women.”    In other words, women were considered as an integral part of society, not sas chattel, not as a group apart.

Progress is often a case of ‘two steps forward and one step back’.  During the 1920s, there were around 150 women’s football teams – but that stopped in the 1930s.  Read this BBC article to find out more here.  More about the history of women’s football in Surrey here.

In continental Europe, progress was checked by Fascism.  Soroptimist Clubs in Germany, Austria and Italy had to close.   Women’s football in Italy was just beginning.  They played one official match, and were banned from playing more.  Football was a game ‘unsuitable for women’. The Depression of the 1930s also affected more businesswomen than businessmen.  In general, more women than men lost their jobs . Interestingly, despite the much-improved status of women in 2021, it is said that during the Covid-19 pandemic, more women than men have lost their jobs…

Our February Film Night produced a lively discussion. We reviewed the film ‘Breathe’, about the life of Robin Cavendish.  At a  young age, Robin had polio, a disease that is a distant memory for most of us.  But polio – like Covid-19 today – was a fearsome disease before the polio vaccine was discovered. Polio made Robin Cavendish terribly disabled, but it did not defeat him.  On the contrary: he pioneered living at home with a respirator. Not only that, he made a huge contribution to improving the lives of disabled people.  He richly deserves the tribute his son, Andy Serkis, has paid him in his film ‘Breathe’ and the blue plaque in his home town in Oxfordshire.

The film buffs among us had a lot to say about the making of the film and how the characters were portrayed.  And the nursing and physiotherapy professionals had many comments about caring for the victims of polio. All members were impressed by the story of Robin Cavendish.  Secretary Christina summed it up when she said “A powerful film, sad in many ways, but inspiring”.

Tickets, donations and a raffle raised £210 for Send a Cow. The charity helps African communities out of poverty.

On 6 February  2021, the Economist magazine had an article about another form of violence to women: honour-based killing.  The article talks about attitudes and the need for change. Find the article here.

Girls can suffer life-long harm as a result of female genital mutilation (FGM).  FGM is a traditional ‘rite of passage’ in some countries.  One organisation that campaigns to stop the practice is Hope for Girls and Women in Tanzania (HGWT). Led by Rhobi Samwelly,  HGWT talks to parents and village leaders to show them  how traditional rituals can take place without harming young girls.  HGWT  also offers safe houses for women and girls escaping from FGM.   The photo show some of the girls from the Butiama area in Tanzania.

The ‘cutting season’ begins in December each year and lasts for several weeks.  So that is when girls start arriving at the HGWT Safe Houses.  In December 2020, 240 girls arrived from the local area.   The charity tries to get parents to agree not to make their daughters undergo ritual FGM.  If parents do not agree, the girls can stay in the Safe Houses .  There they receive education and training so that they can become independent adults.

“We believe creativity is a human behaviour, not a skill”

This month we discovered one of Woking’s best-kept secrets.  It’s a place in the centre of town where you can listen to great live music or make music yourself. Or just chill out. This is what the Phoenix Cultural Centre and Fiery Bird venue offer.

Founder Elaine McGinty was our February guest speaker.  She explained that the aim of the Centre is to make music easy and enjoyable for everyone in Woking.

Phoenix Cultural Centre is applying for funding to improve what they offer to the community.  Find out more and help them get their funding here

We reported earlier about the statue of suffragette and musician Ethel Smyth that will be in stalled in Woking.  But she is not the only famous woman musician the town has known.

Adelina de Lara (1872-1961) was a  talented classical pianist and composer, who lived in Woking. During her long career, Adelina de Lara  studied and played with famous artists.   Some of her pupils became very well-known as did some of her descendants.   So now we know who De Lara Way is named after!

Last year, we reported on the inquiry of the Women and Equalities Committee of Parliament into body image and the digital universe.   The Committee has collected evidence from the general public.  It has also taken research into account.  Recently, the Committee held an oral evidence session.  Members of the Committee put questions to Ministers and other witnesses about what the government is doing and could do to help people who suffer from poor body image.  You can read the transcript and watch the Committee’s meeting here.  You can also read a blog about body image on the Government Equalities Office website here.  Reports of oral evidence sessions are here.

This work is very important.  Poor body image can really affect life chances. For example, in a survey, 1 in 5 people said that poor body image has hampered their career.

Other work relating to social media

The Department of Justice is  also thinking about changing the law to stop intimate image abuse: https://www.lawcom.gov.uk/project/taking-making-and-sharing-intimate-images-without-consent/ .

And the Department for Culture, Media and Sport is working on the harm that can come from social media. Information about that here:

Government Departments must work together to make improvements in this area.  We, the users of social media, must also learn to be stronger in our dealings with social media.