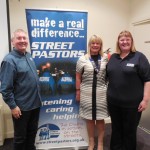 October’s speakers to the club were Phil and Angela from “Street Pastors” who along with a group of other committed Christians patrol the streets of Stalybridge on Friday and Saturday evenings to help diffuse issues of anti social behaviour and assist where needed with pastoral help in all aspects.

Street Pastors is a National Organisation run by The Ascension Trust with over 100 branches in the country. There are 9 teams based in the Greater Manchester area and in Stalybridge there are twenty five members on the team. They have to undertake rigorous training in issues such as conflict resolution, drug and alcohol misuse and street safety. They also have some counter terrorism training all undertaken by Greater Manchester Police with whom they work closely.

They work alongside nightclubs, bars and takeaways, and provide items such as anti drink spiking devices, flip flops, space blankets and bottles of water for dehydration. They also hand out lollies and sweets to raise blood sugar levels after a large amount of alcohol has been consumed. Just by talking, they help to get vulnerable people into taxis which can taken them home, and they will also wait with people who need medical treatment until an ambulance or paramedic is on scene. Street Pastors will also help in collecting bottles and glasses to prevent accidents (they collect in excess of 1000 bottles per year).

The organisation is manned by volunteers from all Christian denominations and is run purely on funds raised by public donations. Stalybridge Street Pastors have been in operation since 2010 and are now a familiar part of the weekend scene in the town.