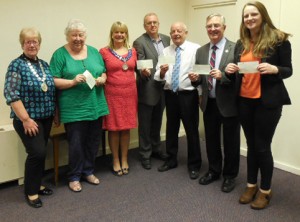 Ashton Soroptimists held their annual Distribution of charities at the club meeting held on Monday 13th April. This year’s President Councillor Yvonne Cartey had chosen the Matthew Burgess Memorial Fund as her main charity and a cheque for £1130 was present to Simon Walker in order to purchase a defibrillator and have in placed in a central position in Ashton Town Centre.

Cheques for £300 were also presented to Willow Wood Hospice and Wood Street Mission in Manchester from the President’s charity Fund.

A donation of £629.81 was presented to Stalybridge and Dukinfield branch of the Royal British Legion as a result of knitted poppies sold on their behalf. This is the 5th year that some of our club members have been knitting poppies for the Legion.

A Donation of £200 was also presented to Stanley House, Audenshaw Masonic Hall, where our club holds it’s twice monthly meetings.

margaret Baker, President of Soroptimist International, South Lancashire Region (pictured on the left) was also invited to the presentation and said how delighted she was to see how many charities our club has been able to support.