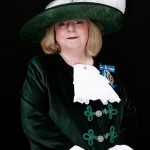 Sharman Birtles, a member of SI Ashton-under-Lyne has been installed as High Sherriff of Greater Manchester for 2015-2016.

The Office of High Sherriff is the oldest secular office after the Crown and is an appointment made by Her Majesty The Queen, as Duke of Lancaster,

The County of Greater Manchester was formed in 1974.  Sharman is the 42nd High Sheriff in the County and the 8th female to hold the position here.  She is extremely proud to be only the second High Sheriff who hails from Tameside.

Commenting on her new role, Sharman said “it’s a huge honour.  Greater Manchester is the largest County outside London with 2.7 million living here so I know it’s going to be a busy year.  During my year in office I want to encourage people to volunteer in various ways and I will be supporting in particular the following Charities:

The Greater Manchester High Sheriff’s Police Trust which is a partnership of individuals, companies and voluntary or statutory agencies that seek to make a contribution to Greater Manchester by supporting projects that reduce crime and the fear of crime in our communities.

Marie Curie Nursing which gives free hands-on care and support to people with all terminal illnesses in their own homes.  The nurses also provide vital emotional support to their families and allow them to make the most of the precious time they have left together.  Ultimately patients have the choice to be in their own homes right until the end.

Boys & Girls Clubs of Greater Manchester which is an umbrella organisation whose aim is to deliver a year-round programme of recreational and educational opportunities to young people, volunteers and leaders within their affiliated clubs and encourages them to reach their full potential and do something positive with their time.