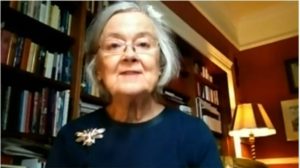 Despite the technical problems the  presentation of Lady Hale was thought provoking and educational about  the position of  Women in Law.

She began with the changes in the 100 years since The Sex Disqualification  Removal Act of 1919 became law.

There were women applying to be lawyers before the act,  in 1903 applications  were made to the bar in London, in 1904 Christabel Pankhurst applied to  join the Law Society, but none were successful as the word ‘person’ in the laws was found not to apply to women!.

It wasn’t until 1929 that definition of ‘persons’ was found to include women.

The 1st women lawyers were admitted in 1921 in Scotland and Ireland and in England in 1922. The first barrister in England was admitted  in 1922 and in Scotland Margaret Kidd became a  Scottish Advocate in 1923 but remained the only one for 25 years.

The attitude to the women was not good though,  the misogyny faced was severe, and one barrister was described as large and blousy, incredibly common and even vulgar.

In 2004 when Lady Hale joined the House of Lords as the first woman Lord  Appeal in Ordinary it was said by one of the existing Lords “Brenda will be a source of some anxiety until we adjust to the very different contribution she will make”. Have things ever changed?

The problem in Lady Hale’s view is one of attrition, especially with family responsibilities for women, which seem to increase as women move up in their profession.

For the Judiciary, the first woman Judge was appointed in 1945. Rose Heilbron, a keen Soroptimist, became one of the first women to become King’s Counsel and then Queen’s Counsel, and was the second woman to be appointed  High Court Judge.

continuing on to Lady Hale’s appointment in 2004 so women now sit at every level of the Judiciary. Currently women make up 32% of  judges in the lower courts, 28% in the High Court and 21% in the Court of Appeal.

Lady Hale then posed the question as to why we should want more women in the Law.

For her, it is important that the law must serve everyone in society, all must feel confident they will get a fair hearing, and for this, both Courts and lawyers must be as reflective as possible of the society they serve. We must remember that women are not a minority group.

In addition the 3 guiding principles  of the law are justice, fairness and equality,  and race and gender should not affect these. Young people should see role models who look like themselves and we must not waste talents open to us.

Finally, If women are included ‘around the table’ it would be much less easy for men to voice sexist views, and if they do, it is easier  for women to call them out. For Lady Hale we need women in the law to educate the men.

A great way to start the Conference. 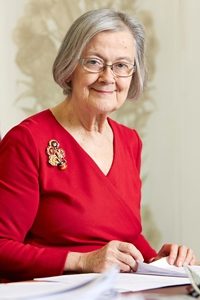 Lady Hale is the most senior judge in the United Kingdom. After teaching law at the University of Manchester for 18 years and then proposing reforms to the law at the Law Commission for over nine, she became a High Court Judge in 1994. In 1999 she was promoted to the Court of Appeal and in 2004 to the appellate committee of the House of Lords.

Lady Hale has been described (Times 29th September 2019) as : ‘One of the most powerful women in Britain, and certainly the most prominent wearer of brooches’. She defines feminism as ‘believing in equality, equality for women and the validity of women’s experience.’