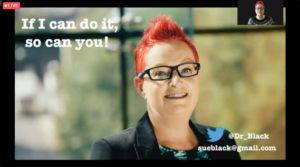 I was eager to listen to the keynote. The title was intriguing. “If I can do it, so can you!”

Dr. Susan Black started her address by saying that ‘the most successful people are those who keep going despite difficult situations. They are people who choose to stay committed to their goals’. I knew immediately she was inviting us to learn from her life’s journey.

To lay the foundation to her address, Dr. Susan Black describes her life as a young adult. She was a girl geek, right from the very start. Whenever she visited WHSmith she’d go straight to the Mathematics book section. She loved books on Mathematics puzzles. Besides her love for Mathematics, life was normal. However her life was shaken up after her mum’s early death and her father remarried. All of a sudden her family went from being an average functional family to a complete dysfunctional family. Owing to this, she dropped out of school at 16 and left home. By 20, she was married. However her marriage broke down and by 25 she was a single mum with three children who had to live for a while at a women’s refuge. Having left school at 16 and with no further education, she realized she would only get jobs with minimum wage and that would not be sufficient to take care of her children effectively. That’s when she thought of going back to school. The first thing she did was to join a local college that was offering courses in Mathematics. After taking two A-Level courses for a year, she enrolled in university. At University, she took up a course in computing technology.

Life was hard! As a single mother she struggled to take care of her children and focus on studies. In the first year, she just managed to pass with 52% (the required grade to pass was 50%). She was dejected, yet she did not give up. She persevered and graduated with a bachelor’s degree in computing in 1993. Her final year project supervisor advised her to apply for a PhD in computing science.  And in 2001 she completed her PhD with a thesis on the ‘Computation of the Ripple Effect Measure for Software’.

Dr. Susan Black goes on to share with us the practical challenges she encountered at work. By the time she finished her PhD, she was a full time lecturer at the university. As part of her PhD program and her work, she attended several Computer Science conferences. However she realized there were 90% men and 10% women at these conferences. Women were not a majority. When she approached men to discuss her work or her thesis, she quickly realized it was going nowhere. Then one year she went to a conference in Brussels for Women in Science. It was a huge difference! Discussions were no longer uncomfortable. She realized that ‘If you are in a majority; life is different’. This realization prompted her to set up BCSWomen in 2001. BCSWomen provides networking opportunities to women working in IT around the world.

Once during a visit to the Bletchley Park, Dr. Susan Black noted the dilapidated condition of the buildings. This park was home to the Bombe machine and the Colossus computer. Ten thousand people had worked there during World War II to decode messages transmitted by German forces. The cracking of the codes probably shortened the war by two years possibly saving 22 million lives.  This story coupled with her love for computing, inspired her to start the ‘Save Bletchley Park’ campaign. Her story gained international attention. However the park wasn’t saved. Then in 2008, she used Twitter and realized the power of social media to reach out to people outside her known circle. She worked on the campaign until 2011 and helped raise £4.1M. She completed her first book ‘‘Save Bletchley Park’ in 2015 which details this campaign journey. It has been an Amazon UK bestseller. Also Dr. Susan Black learnt that there were 8000 women who worked at Bletchley Park during the war. These were the women in tech. She decided to find a way to document and showcase their stories.  BCSWomen produced the film “The Women of Station X”.

Around 2012, Dr. Susan Black started tech workshops to introduce coding to children. That’s when she realized she could get mums excited about tech too. And the first #techmums pilot took place immediately after. The idea is to build confidence in women. #Techmums focuses on getting mums to design apps, write code, do web designing as well as imparting other computer programming skills. Another similar project is TechUPWomen. This is her latest project. The 2019/20 TechUPWomen cohort, a pilot program, had 100 underserved women onto a 6 month guided program to retrain them in technology subjects, with the aim to help them access roles / internships / gain career promotions.

Dr. Susan Black summed up her inspiring journey from a single mum who struggled with poverty to being a Professor of Computer Science and Technology Evangelist in the Department of Computer Science at Durham University, by highlighting her achievements. She was invited by the PMO’s office to advice on improving digital services, she was appointed Officer of the Order of the British Empire (OBE) for her services to technology and she met the Queen. She was awarded the Social Impact ABIE Award at the Grace Hopper Celebration in 2017. She is a Trustee for Comic Relief. She is a Social Entrepreneur, Tech Evangelist, Computer Scientist, Writer, Public Speaker and a Thought Leader.

She is truly an inspiration! 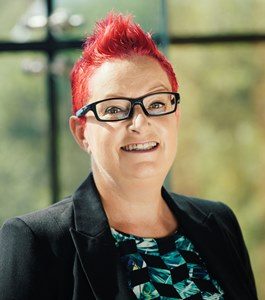 Professor Sue Black OBE was recently named in the list of top 50 women in tech in Europe, and winner of the Lifetime Achievement Award at the Lovie Awards 2018. Sue is one of the leading tech personalities in the UK today.

An award-winning computer scientist, radical thinker, and social entrepreneur Professor Black is well known for founding the high profile campaign to save Bletchley Park, capitalising upon social media as a fitting continuation of Bletchley’s technological legacy. She is a passionate advocate for women in tech, and has spent the last 20 years campaigning for more recognition and support for women in computing. This led to her founding #techmums, a social enterprise which empowers mums and their families through technology.

Professor Black is also an academic with 20+ years’ experience with over 40 publications and a PhD in software engineering to her name. In 2017 she received the Social Impact ABIE Award at the Grace Hopper Celebration, was made an OBE in the New Year Honours list 2016 and sits on the Government’s new advisory board for improving digital services. Professor Black has joined the vibrant computer science department at Durham University as a Professor in Computer Science and Technology Evangelist. The role will combine her research interests, with the opportunity to inspire and motivate others in the field.

Recently Professor Black was interviewed by Kirsty Young on Desert Island Discs covering all things tech and how to “be your best self on social media” and appeared as a guest panellist in the special edition of Woman’s Hour recorded live at the British Science Festival in Brighton. She has most recently featured in a video as part of the BBC Ideas online platform in which she tells her story and shares her advice for being successful and finding the superhero in yourself.