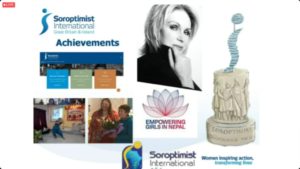 Questions, questions were in my mind.  I could imagine speakers, even live Q&As but how would one do the Change of Insignia. Well the entire experience of coming on stage and being adorned with the necklace of their club, as the position of Presidents change hands was missing and just the pictures of old and new presidents were seen. The cheering for the ladies that used to wait in line for us to admire was missing too. Having said that it was lovely to see them closely in the pictures for each region, some with their necklaces of their clubs and some casual. What was nice was to hear clearly about the themes they had set up for themselves.

This was sandwiched between the farewell speech of President Isobel Smith and the Inaugural speech by the incoming President Johanna Raffan. Maureen McGuire, President Elect of Soroptimist International, expressed her disappointment as she began the closing ceremony, that we were all not in her home city Belfast. As women she felt the conference had shown us the way to stand up for ourselves, each other and justice for all, thus impacting the future of humanity.

Outgoing President Isobel Smith started by telling us of the year which had been quite a roller coaster ride for her with uncertainties that had rattled us. She felt however that her focus had been on achievement of mission and vision in the 3Es. She made the analogy of a bowl of spaghetti with no clear story to tell where the sauce was us. We with our expertise and zing, with our six degree of separation had pulled together. She showed how the pandemic was a positive experience, because she was virtually able to visit many regions, even chartering one of the two clubs, SI Purbo Burdwan in India and celebrating with them.

She proudly explained about the new website, congratulated the new SI Africa Federation and thanked her working party and teams, not forgetting the Belfast Conference Committee for a job well done.  She concluded by saying that the key ingredient was relationships. She felt she had achieved most of what she had set out to do which was increased visibility, a louder voice, new members and new clubs.  She bid farewell welcoming the new President Johanna and President Elect Cathy Cottridge. 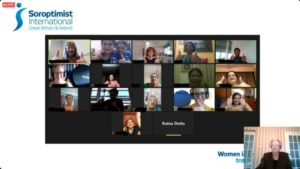 Johanna Raffan began her inaugural address by explaining about her name which she said was a result of three Norwegian grandparents. She said she was born in Wales, married a Scotsman and lived in England. After thanking Outgoing President Isobel and the new Presidents, she fondly remembered Barbara Dixon. She said she had decided to incorporate the theme Barbara had wanted which was “Believe to Achieve”

She told us a story to explain this theme. Having been over 45 years in education encouraging to improve provision for highly abled children, she said teachers had to believe they can achieve. The story was about a boy, Pedro who had an IQ of 170 but could not read or write. Clearly not a candidate for the school he was spared when a teacher offered to teach him. After three weeks of tutoring the head found him playing chess and winning. On asking Pedro, he said he had learnt by reading a book on chess. When asked but he could not read, he answered that he had learnt to read a week ago but did not say anything because he liked his teacher Ms. Rosa. Believe to achieve.

She pointed out that Soroptimists two pillars, membership and program, were to be her two key objectives for the year. She hoped therefore to visit everyone belonging to SIGBI and would set up a working party to look at the future. She felt it was a long term work, whose impact would come slowly in two years.  She felt that the Board change was a start and membership crucial. She talked about virtual clubs being inducted and was happy to see the enormous challenges and diverse ways clubs had been working throughout the pandemic.

She said Gender Equality was high on UN agenda as stated in UN75 Declaration, and felt that Soroptimists had worked for a 100 years for this, and education and improvement of women. She felt with a lot of work ahead with issues of women abuse, black lives matter, climate change and modern day slavery the young people could lead the way.

She emphasised that we must be kind to each other and ourselves and model what we’d like to be with deeds not words. She pointed out that most of SIGBI countries were commonwealth countries. She said the definition of commonwealth was a group of persons united for the common good. So it was fitting that our NGO status with the UN and consultative status with ECOSOC we were well placed to make the difference. Our forefront she said must be advocacy and SDGs. I liked the way she joined the past and present themes saying that we were charged to BUILD BACK BETTER to BELIEVE TO ACHIEVE in 2021.

She ended with the announcement of celebrations to be held in Llandudno on a grand scale, and offered a challenge for the Diamond Education Grant. She is willing to match funds for the most innovative ways clubs can raise funds and the most funds raised, where she asked clubs to give a hundred British pounds for the 100 years of Soroptimism.  She closed by introducing the new Board and Ann McDonald who would be handling next year’s Llandudno Conference.