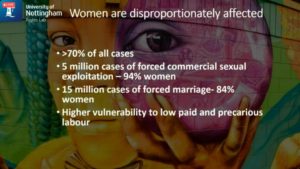 Slavery is a condition in which one human being is owned by another. It has been practised from time immemorial and is quite prevalent even now, albeit practised secretively, with a large part of the victims being women and children.

Dr Alison Gardner is attached to the Rights Lab of the University of Nottingham and her focus of activism is mainly in Nottingham and Nottinghamshire.  She is engaged, through her academic pursuits and social activities, in raising awareness about this ghastly practice of slavery and is trying to encourage community based practices to eradicate this blot on humanity.

Her talk was substantiated with a large amount of statistics presented by graphs, and tables. That made her points more lucid and comprehensible and her arguments more forceful.

One slide marked the world atlas by the percentage of slavery among the population with 7.6% in Africa, 6.1% in Asia, 3.9% in the mid-east, 2.0% in Europe and 1.9% in the US. Some of the consumer goods that have direct use of exploited labour are, gold, diamond, garment, shoes , food processing, rice, sugarcane, bricks, carpets, fireworks ,shrimp, bananas, cotton, cocoa and a huge variety of other everyday used things.

Alison said, some of the types that slavery takes are forced labour, sexual exploitation, debt bondage, human trafficking, child slaves and forced and early marriage. More than 70% of all such cases involve women.

About 5 million people were commercially or sexually exploited all over the world. There are three types of human trafficking, forced labour, domestic servitude and sexual exploitation.

In UK, in 2014, Govt found that 10,000 to 13,000 people were living in conditions of exploitation, and the citizens of UK, Albanians and Vietnamese being the main victims. They were engaged in the industries of agriculture, hospitality, construction etc. This is the face of modern human trafficking and the British Parliament brought in the UK Modern Slavery Act, against it in 2015 to counter such activities.

With the help of a graphic, Allison explained that the community must build resilience against human trafficking and exploitation via a Multi Layered System. It starts with Prevention, followed by Discovery, Respite and Recovery and finally to Sustainable resilience. These include welfare and anti-poverty measures, education, gender equality, rule of law, human rights, justice, healthcare, job facilities, access to capital, and labour rights. A society that boasts of these factors will also be resilient to human trafficking.

Being passionate is key. To raise community awareness, one’s depth of engagement is important. There should be greater reporting and activism increased.  There should also be accurate diagnosis of areas of change. Finally the consumption behaviour of the population should be challenged if necessary.

Alison did a detailed cost-benefit  study of combating exploited labour. Her findings are substantial. She rightly said, the procedure of elimination of forced labour and then the process of rehabilitation and survivor support are factors that can produce political issues.

It is clear the police cannot work alone. But will need to coordinate with several agencies.  She also recommends community activism. It is a long journey but well worth it.

Alison Gardner’s talk was gripping and people watched her presentation with bated breath. 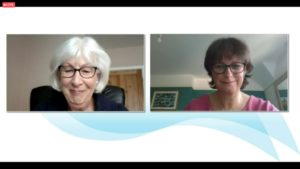 Finally there was a spate of questions. How to stop a rescued victim from sliding back to exploited labour. Alison said it is imperative a good NGO experienced in rehabilitating take charge of the victim, so that she can be properly guided to lead a safe and useful life. She offered to help with any kind of information if she is contacted (alison.gardner@nottingham.ac.uk). She said the Foundation Walk Free, she helped create in2018, outlines ways to combat Human Trafficking and Modern Slavery.

One questioner suggested stopping to buy cheap consumer goods would go a long way in reducing exploited labour. Alison agreed. Cheap goods mean, someone is paying the price that we are not paying. We must encourage industries to do the right thing.

In reply to another question, Alison said media reports help by raising awareness regarding extreme poverty, homelessness, and physical disability of people. These can warn people of the possibility of labour exploitation.

And can we spot slavery ? Alison said, by being vigilant. If you see people being controlled by someone else or with travel documents missing, these are clear signs of human trafficking. 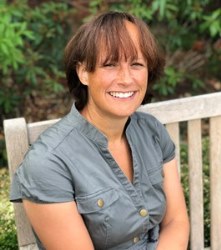 Dr Alison Gardner leads the Communities and Society research programme at the University of Nottingham’s ‘Rights Lab’, a global research programme which aims to contribute to the UN’s sustainable development goal 8.7 of ending slavery and forced labour by 2030.

She was the winner of the 2018 Marsh Prize for Community Activism in Combating Slavery, and named in the UK Top 100 Modern Slavery Influencers for 2018.

Her work focusses on place and community-based responses to modern slavery, including campaigning work to develop slavery-free cities. She has career experience and expertise in local government and public policy.