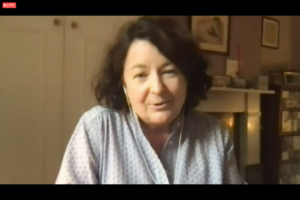 The title of Jane Garvey’s speech was “Speaking Up”. It was fabulous to realise that Jane was going to speak to us live because, out of necessity, most of the other speakers at this year’s virtual conference had pre-recorded their presentations. She talked to us from her home in London and it really did feel like a cross between a regular online video conversation with a friend and listening to a professional BBC Radio 4 Woman’s Hour broadcast – it was wonderful! For me it was a real treat to be to be allocated as the blogger for Jane’s part of the conference because she is my favourite Woman’s Hour presenter and I love to listen to her shows whenever I can.

Jane started by praising the work that we do as Soroptimists and how good it was to find out more about what we do ahead of being our star conference speaker. She also said how much she had been looking forward to going to Belfast because of her Irish family connections.

Jane is aware that she is privileged that most of her working life has been spent doing something she loves. As a teenager she remembers listening to Radio 1 when it was mainly men in broadcasting so she never thought it would be possible to have the career she has had. She wrote to the BBC children’s TV programme Blue Peter age 8 and it was then she set her heart on working for the BBC – but it took 7 or 8 applications before she was successful. She started working for a local commercial radio station in Worcester in 1987 after getting fired from her first job which was in advertising and that she hated. She went home and told her Dad that she wanted to be a disk jockey, and he said “you’re on your own in that case…”. She wrote to 30 radio stations and two replied – one was a rejection letter and the other one, Radio Wyvern in Worcester, offered to take her on for work experience, which she accepted.  Jane said the 8 years she spent at this commercial radio station was great experience – she learnt how to interview and how to broadcast live. She also made great friends. She delivered a breakfast programme and realised the importance of local radio in community, sticking together and helping each other. She believes that local radio is even more of a lifeline in COVID-19.  This pandemic is hopefully the closest we’ll ever get to a wartime experience.

Jane says her personal circumstances make her the “jam in the sandwich of life” – she is supporting her daughters (one at home and one at university) and elderly parents.

In 1993 she went to work for BBC 5 Live which was a massive change from local radio – she moved to London and a driver picked her up to take her to take her to work at BBC Broadcasting House. She really felt how much more important it was and more frightening – although at still only age 29 she’s not sure she was as nervous then as she would be now because she still had the spontaneity of youth. She has some wonderful memories of doing commentaries on BBC 5 Live of historic events like Princess Diana’s funeral.

Jane was very frank with us and said that she thinks that radio presenters are a peculiar breed who often get things wrong she thinks they are “thin-skinned and attention seeking”. She agreed with a quote from the late Sir Terry Wogan who said they were “introverted egomaniacs”.

Woman’s Hour has had an important effect on lives. It was launched in 1946 as a companion to women in the home – many of whom had to return to domestic life post-war. The first presenter was male because the men running the BBC thought that women would need a man to talk to them but this only lasted for 6 months and it has been presented by women ever since. Jane joined in 2007 alongside Jenni Murray although they almost always worked separately. Jane and Jenni did compare their salaries and found out they were earning much less than the men at the BBC. They often talked about equal pay on the programme but the irony was that they were paid less themselves…

Jane said that Woman’s Hour does “taboo busting really well”, they always use the correct anatomical terms and talk about physical and mental health in what is considered by many to be “a safe radio space”. When they ran a programme on faecal incontinence they were overwhelmed with gratitude in hundreds of emails from listeners thanking them for raising the issue. Some emails received following programmes are heart-breaking.

57% of the Woman’s Hour audience is female currently and there are many young women tuning in. Jane says it is the “stuff of real life that is most appreciated by our audience”. Sometimes they can be accused of being star-struck by guests and they tend not to get interesting answers from people like film stars – which she thinks is transferred to the audience who is then not that interested.

Jane looked at the schedule for the next show which will cover HRT and mental health for university students and in the last week they had covered topics from sexual assault to pottering – there is no subject too trivial or too high brow. Jane is proud that Woman’s Hour has kept going through the last 6 months of COVID-19 with only 3 people allowed in the office at any one time and most guests not in the studio. Jane has missed people even though she always thought she was anti-social and she never thought she would miss parties but she does! People are appreciative of the BBC and how it has reacted to delivering broadcast services during COVID-19.

Jane is leaving Woman’s Hour in the New Year – she knows it will be different but good and the time is right for a fresh start for the programme with new presenters.

Jane ended her talk reiterating that she has enjoyed hearing about the great work that Soroptimists do. 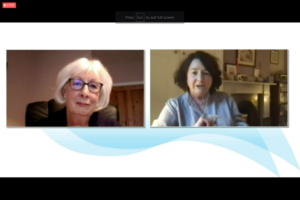 Having been very open in her presentation to us she continued in this way with the live Q&A.

Most interesting guests? She remembers a nun called Sister Enda who was a volunteer working with sex workers in Birmingham, providing them with soup and sandwiches – doing something decent and something that no-one else would want to do. Another strong memory was a visit to Styal women’s prison and meeting a woman who said she preferred being in prison to living in the outside world because she felt secure in prison. Jane said these are the type of people she wants to remember. She remembers not seeing eye to eye with Tilda Swinton – asking a question that wasn’t well received and never recovering the flow of the interview after it. Another strong memory was interviewing Hillary Clinton who had fallen the morning she was due to go on the show. Jane went to lunch not expecting to have to record the interview the same afternoon after a drink too many over lunch – she said Hillary Clinton was amazing but her own interviewing skills were lacking that afternoon…

Is there still a place for Woman’s Hour now women’s issues are mainstream? a question raised by India Knight recently in the Sunday Times. “Absolutely a place for it” said Jane. Family life is still more of an issue for women and the impact of COVID-19 on women’s lives needs to be considered separately.  Jane said she will always defend Woman’s Hour – it gets attacked simply because its name has the word woman in it – but the audience is getting bigger and the podcasts (available on BBC Sounds) are really popular.

How can Soroptimists become more involved with local radio? Jane thinks our name is our biggest problem because it doesn’t give a clue about what we do. She thinks that if any of us has a snappy idea for something to be talked about on a local radio show they will bite our hands off to have us on to talk about it.

What advice can you give young women who want a career in radio? “Go for it” – develop a broad interest in matters that are not just interesting to women. Jane hopes it is easier now than when she started but women still have to be better than men to succeed and they have to argue for equal pay.

Are social media influencers taking over from journalists? Jane said that she despairs sometimes – but it is a different generation and they do things differently. She thought the questioner was onto something important with the question and that its isn’t good enough to just accept what you’re told. When interviewing you need to be awkward and ask awkward questions which is what good journalists do.

Are there equal numbers male/female behind the scenes at the BBC now? Jane thinks it is better but doubts it is equal.

Will you interview the SIGB President on Woman’s Hour?  Jane says it is not her decision but to send in the request and she’d see….

In your experience are men wired differently? Jane says sweeping generalisations are unhelpful. On Woman’s Hour most guests are women unless the best qualified person to talk about the subject happens to be a man. She says she is looking forward to interviewing more men in her new career.

Where Next? Jane decided it was time to leave Woman’s Hour in the new year and that it deserves new presenters. She is staying at Woman’s Hour until then and currently you can also listen to recorded podcasts of a programme called “Fortunately”. Jane loves live broadcasting rather than recorded and is expecting to be doing more live programmes next year. 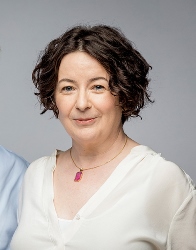 Jane Garvey is the presenter of BBC Radio 4’s Woman’s Hour and co-presents the hit podcast Fortunately with Fi Glover. She presented the Sunday evening BBC 5 Live programme with Peter Allen. Jane also presents a wide range of documentaries for Radio 4 including the series, Summer Nights and The Lost World of the Suffragettes for BBC World Service.

Before she joined Radio 4 she co-presented Five Live’s Drive Show on weekday afternoons on BBC Radio Five Live, for which she received Sony’s News Broadcaster Award Gold Medal in 2002. Jane was the first voice on BBC Radio Five Live when it launched in March 1994, as co-presenter of the award-winning Breakfast Programme. As part of the station’s 20th anniversary Jane presented a special programme.