Five members of SI Bristol travelled to Bournemouth for the annual conference with over 800 other delegates. The South West and Channel Islands Region was well represented, three members were chair people including our Sue P.

On day one the conference opened with two inspirational speakers. Baroness Susan Greenfield spoke about her work on dementia and hopes to revolutionise diagnosis and treatment. George Anderson spoke about leading ourselves and others to better wellbeing mentally and physically.

Penny Mallory an inspirational speaker, currently a performance coach, told us of her ambition, from the age of 6years old, to be a successful rally driver. She had a difficult childhood and then tried various adventure activities. She said that mental toughness is an important part of development and challenge, confidence, control and commitment is part of this. Communication is fundamental to performance and that we need to be tough to follow our passion.

Programme Action, our project work followed. We were “entertained” by the winners of “the Best Practice” awards and informed of the other work we are involved in – very impressive.

At lunch time we were able to catch up with our Friendship Links. We met with SI Bootle and spoke SI Halifax but we 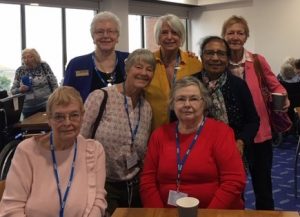 The last speaker of the day, Leila Hassein, spoke about Female Genital Mutilation (FGM). She showed a film of a group of young men discussing FGM and then being shown the process of FGM. At the end of the film they were shocked and were keen to support a campaign against it. She told us of the huge numbers effected and that every  1 minute 11 girls undergo this procedure. She described the indicators and what we should look for and that cit is clearly sexual abuse and safeguarding procedures should be followed. She asked us to support the project “End FGM and Promote Emotional Wellbeing”.