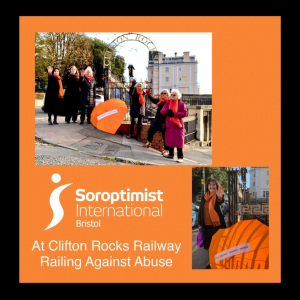 Orange the World: Railing Against Abuse

Yet again we Oranged the World starting at our Club Meeting on November 22nd saying “no” to Abuse.  Then on Thursday 25th November we joined a Regional “Railing Against Abuse” march organised by Soroptimist Weston-super-Mare in Weston and a group of Bristol club members also met at the Clifton Rocks Railway in Bristol (built in the 1800’s), tied orange ribbons on the gate to saying “No to violence against women”.

For the “16 Days of Activism” we posted on social media and then finally on the 10th December we held a Zoom meeting inviting our Friendship Links and had a speaker from Save the Children.  A fitting way to end our 16 days of Activism Saturday 27th November 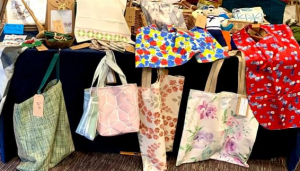 St Peter’s Hospice Fundraiser:  Our Charity of the Year

Our Soroptimist Bristol team had a stall in a Gift & Craft Fair in aid of #stpetershospice at On 27th November we joined other stall holders at Westbury-on-Trym Methodist Church Hall with a stall in aid of St Peters Hospice.  Some of the items (some of which are seen in the photograph) were hand made many of which were from fabric donated by Hillarys Blinds which would otherwise have gone to landfill.  In addition there were greeting cards, homemade produce to name but a few.  We raised over £500. 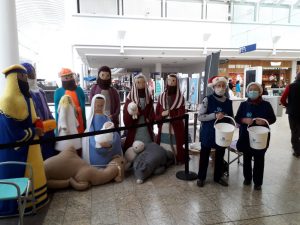 On the 21st December Sue P, Susan G and Marion collected donations for St Peter’s Hospice at the Mall.  The figures form a nativity scene of full-size figures that were knitted by volunteers (hence knitivity). 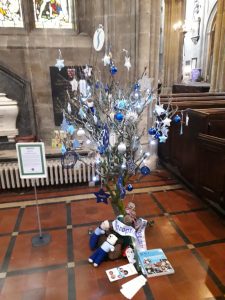 This is the fourth year that SI Bristol has participated in the St Mary Redcliffe Treefest.  Last year, due to the restrictions imposed by the Coronavirus pandemic, it was an online event.  This year, it is back in the gothic church of St Mary Redcliffe.  The Treefest consists of over 40 trees creatively decorated by resourceful people in local charities, schools, businesses and other organisations.  Thanks go to Denise, Duncan (Soroptomister), Yvonne and Marion for decorating, in situ.  Our tree  this year is a lichen-rich bough from an ancient apple tree.  The Treefest ran from 2nd to 5th December and on Saturday 4th there was a special Carol Service.   This years charity was Treeaid www.treeaid.org.uk 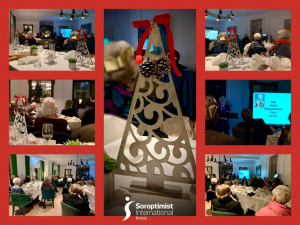 This year our final meeting was our Christmas party.  Sadly last year thanks to Covid it was a virtual party and it was lovely to feel “normal again”.  Audley Redwood did us proud and produced a delightful Christmas meal and the tables were beautifully decorated by one of our own members.

We welcomed Tim Lewis and Sheila Furneaux.  Sheila played the keyboard and Tim sang songs on the theme of “The Most Tremendous Tale of All”.  A Christmas story using the Ladybird books to illustrate the tale. 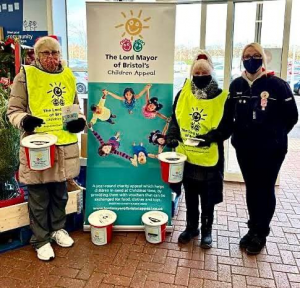 The Lord Mayor of Bristol’s Children Appeal is a registered charity that raises money throughout the year to help the city’s most disadvantaged children and young people at Christmas time.  Traditionally we have “bag packed” for the appeal but on the occasion, we collected at the door.  It was a chilly day but the shoppers kept us cheery and we collected nearly £500.   The Children’s Appeal was also Tesco’s “November Charity of the Month” and so we were also given nearly £300 from their second-hand book sales.  A very worthwhile event.

Many thanks to everyone who worked so hard during 2021