We were privileged to host the most recent regional meeting, which took place on Saturday, 21 March, at Wolston Community Hall. After the normal business had been concluded, we had two excellent speakers.

Steve Arthur of Wessex Water also volunteers for WaterAid, a charity founded in 1981 by leaders of the water industry. Steve told us about some of the work WaterAid is doing in Burkino Faso and Ethiopia. He also highlighted how WaterAid’s values and aims mirror those of soroptimism, particularly their recent campaign ‘To Be A Girl’.

Sue Biggs, SIGBI Programme Director, gave an update on the Federation’s plans to build for the future, focussing on increasing membership and offering new forms of membership. She outlined the Marketing & Communications plan as well as the Growth Plan for clubs, and finally invited applications for the new SIGBI 3-year project; three short-listed applications will be presented at the Glasgow conference in November.

The raffle offered splendid prizes, including a large basket of fruit, a designer watch and a beautiful orchid; unsurprisingly it was well supported, and raised £266 for WaterAid. Our club stall selling Easter-themed goodies did a brisk trade, and we raised a further £144.50 for our club’s charity, PlanUK’s Because I Am A Girl campaign. 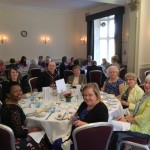 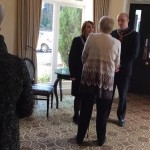 This took place on Sunday, 22 March, at 12.30pm at the Brandon Hall Hotel.  We were delighted to welcome Coventry’s Lord Mayor, Councillor Hazel Noonan and her consort, her son Christopher; Rotary International Past District Governor, David Robinson; MAR Vice-President Algar Gordema-Braid; visitors from other MAR clubs, potential club members and many ‘soroptomisters’.

After a delicious meal, our speaker, Pam Miller, treated us to a miscellany of monologues and anecdotes, many originating from Pam Ayres.

June welcomed club members to her home for a home-cooked lunch on Tuesday, 7 October, and Thursday, 9 October.  Three delicious courses were served, and before leaving each guest left a donation reflecting their enjoyment of their lunch and the good company and conversation.  Over £100 was donated, and this will be shared between the Benevolent Fund and the club’s charity, Plan UK’s ‘Because I Am A Girl’ campaign. 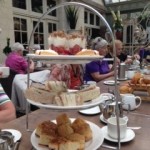 On Tuesday, 12 August, around a dozen members of the club met at Coombe Abbey for afternoon tea.  It was a lovely relaxed and enjoyable afternoon.