Many women all over the world during the First World War had gained independence and freedom by using their skills and competencies in management and the professions.  There was a growing need for the development of female Clubs where women could meet on their own ground, the like of which men had had for many years. 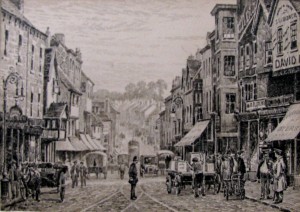 In 1920 women in Bristol formed a ‘Venture Club’ which had similar aims to the later Soroptimist movement, founded the following year (1921) in Oakland, California (by a man!). Coventry with 18 members became the eleventh Venture Club in England. It was formed with the guidance of the London Venture Club, and help from Coventry Rotarians, and to this day the Presidential Badge (a gift from a member of Coventry Rotary Club) bears the word “Venture”.  By 1929, however, measures were taken to amalgamate Venture Clubs with the Soroptimist movement, which had similar ideals.  So in March 1929 Coventry received its Charter as a Soroptimist Club, becoming the 50th Soroptimist Club in the World.

As a number of Soroptimist Clubs increased world-wide the British Clubs became “The National Union of the United Kingdom” and a member of the “European Federation of Soroptimist Clubs”. Miss Muriel Carter, a founder member and first President of Coventry Club represented them on the National Union Board of Governors.  Miss Carter later emigrated to Australia but returned at the age of 92 to join the Coventry Club celebrations for its 60th Birthday in 1989.

In 1934, at the International Convention in Paris the “National Union of Great Britain” left the European Federation of Soroptimist Clubs to become “The Federation of Great Britain and Ireland (SIGBI)”. The British Federation divided the country into Divisional Unions and Coventry was part of the Midland and Eastern Counties Union, becoming Midland Arden Region (MAR) in 1990 and one of thirteen Clubs that make up the Region.

During the second world war the C 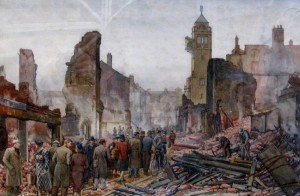 oventry members were much involved in helping with local problems especially after the Blitz on Coventry in 1940.

Monetary gifts received by SI Coventry from Canadian Clubs during 1944/45 were used to swell the already existing “Flats Fund” set up in 1937/38 as a first step in providing accommodation for women of limited means.  Property was purchased in 1945 in Dalton Road and opened as “Soroptimist House” the following year and this absorbed the main financial commitment of the Club for the next few years.  Later the purchase of the adjoining house was completed, but with rising costs and maintenance of the property it was decided to donate the house to the Church Housing Association in 1981.  Club members still keep contact with the residents of “Soroptimist House” and provide gifts at Easter and Christmas. 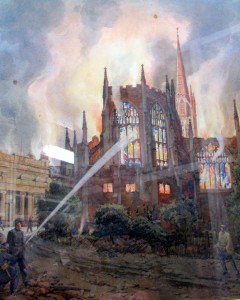 Besides the early links with Canadian and later American Clubs (which sadly have ceased) Coventry over the years has forged friendship links with Deakin (Australia), Akeja (Africa), Cork (Ireland), Arnhem (Holland), Dresden (Germany) and in 2000 St Etienne (France).  Informal links are maintained through visits and letters with other Soroptimist Clubs around the world by individual members.

Coventry Club was 80 years old in 2009 and is still moving forward and working for many charities at home and abroad. We have raised money for “Limbs for Life”, Myton Hospice, the Acorn Trust, which provides respite for young terminally ill children, the Alzheimer’s Society and Global Vision, which helps the victims of conflict.  Many members provide ervice in all sorts of ways by visiting and leading activities in an Old People’s Home, visiting the sick or doing voluntary work for their chosen charity.  Often the service members give in the name of Soroptimism is unsung and unrecorded, but ask a busy women to do a job, and she just gets on and does it!

Coventry Club’s history records a weekend Conference held in Shrewsbury in the period 1955-56, on the theme of “Gracious Living”, a theme very different from nowadays when we attend Conference to discuss Landmine Elimination or our Teenagers and their problems!  For many years Coventry members always attended meeting wearing hats and gloves but in 1960/61 it was agreed that the use of Christian names could be introduced among members and hats and gloves need not be worn.  Fifty years on, our Club is less formal but still conforms to the Objectives of Soroptimism and places great value on the bonds of friendship within the Club, forged through working together for common goals.

More recent, as well as supporting International Projects, Coventry members work locally and have provided financial help to local charities such as the NSPCC; The Boot Fund; Brain Damaged Children; The Coventry Toy Library and Language on Loan.  We have supported Coventry Hospitals, Fords Hospital, Medical Research Unit at Warwick University, the Environment Project Brandon Woods, financial support has been given to a Coventry Health Visitor who actively promoted health education in Romania.  We have supported three young women working on projects in Tanzania, Namibia and China.  The Alzheimer’s Association, Acorn Hospice, Dogs for the Hard of Hearing, the New Coventry Hospice, Jo Homan Homes and supported three young women in their education to name but a few.