Five of us represented SI Coventry at the 20th Anniversary celebrations of SI St Etienne in France on Saturday, 18th October. St Etienne is twinned with Coventry due to its similar industrial history including weaving and silk and ribbon manufacturing.

We arrived on Friday 17th October to be met by our hosts Claude, Francoise, Marie-Christine and Marie Ange at St Etienne train station. We were then escorted to a local hotel for tea and delicious cakes and introductions made accordingly. We then dispersed to our assigned hosts’ homes, where we were entertained to dinner and the obligatory champagne.

The following morning after a typical French breakfast we all met in the local town of Veauche, from where we travelled by coach to the Loire Valley to visit Prieuré de Montverdun, a 14th century monastery perched on a volcanic hill, with a guided tour, followed by a sumptuous lunch at a hotel in Montbrison. In the afternoon we were escorted on a walking tour of Montbrison, including the Collegiate Church (below left), the Diana 13th century Meeting Room (below right) , the site of the local Chateau, and two Convents, Ursuline and Cordelière.

We then returned to Veauche for a celebratory dinner at ‘Le Relais de l’Etrier’ at 7.30 pm. We managed to change into our finery with the masked clowns and were offered kir royale and canapés. We were seated and introduced to the National President of SI France, Francoise Lathuille, who delivered her address. She had travelled from Chamonix, a three-hour drive, and drove back again after the dinner! The outgoing President Paule Henriette spoke, followed by the incoming President Mireille. Beautiful flower arrangements were presented to various club members for their contributions. President June then presented a cheque on behalf of SI Coventry for the club’s main charity. We were finally served our main course at 10.00 pm whilst being entertained by the Viennese Masquerade Puppeteers, culminating with champagne and a festive gateau paraded into the room with candles alight! 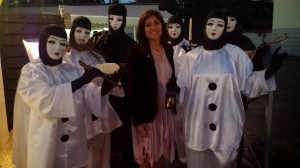 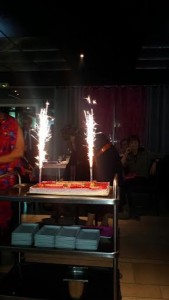 The following morning after breakfast in the garden (the temperature was 25 degrees celsius for the duration of our visit) Francoise took two of us on a tour of the local foothills of the Alps famous for cross-country skiing. We then proceeded to the home of Paule Henriette in Firminy for a delicious 5-course al fresco lunch.

Alas, we then had to say our goodbyes and depart for Lyon, where three of us enjoyed a lovely two days sightseeing and visiting the bouchons (small restaurants) in this gastronomic capital of France.

The club received an invitation from SI Arnhem, one of its Friendship Link Clubs, to a Friendship Day in May.  I was delighted to accept and was offered hospitality by one of the Dutch club members.

The theme of the day was ‘Family Run Businesses’ and we started with morning coffee and cakes at Burgers Zoo.  The first presentation was by the current owner of the zoo, which has been a family-run business for just over 100 years.

This was followed by presentations by members from clubs in Croydon, Düsseldorf, and Levanger.  After a lovely buffet lunch it was back to work; we were split into groups for an interchange of ideas on how we work on projects in our various countries.

At 3 pm sharp three guides appeared to show us something of the zoo and to take us behind the scenes.  We then had tea and more cake before leaving the zoo and going to Rozet, a new architecturally interesting cultural building in the city centre.  After a guided tour of the building we had dinner in its restaurant before going our separate ways.  It was a busy day, but full of interest, and it gave us all an opportunity to meet old friends and make new ones.

I stayed in Arnhem for the weekend and enjoyed a tour of the city, a visit to an open-air folk museum, dinner in a member’s home on Friday and brunch at the club president’s house on Sunday before my flight home.  It is on occasions like this where you really appreciate the international aspect of our organisation.